Derek Scally: Merkel method will be missed on world stage 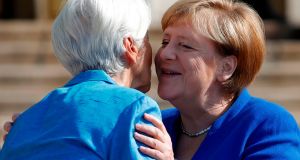 When US president Donald Trump was asked – in her presence – about the only woman leader soon to depart the ranks of G7 leaders, the chancellor piped up, in English: “I’m still here.”

Unknown to her she was quoting the survival anthem from Follies, a musical drama by Lion in Winter playwright James Goldman and composer-lyricist Stephen Sondheim.

Their 1971 show is a bleak affair about middle-aged regret and roads not taken. I’m Still Here is an actor’s bittersweet ode to passing glory: “First you’re another sloe-eyed vamp/then someone’s mother/then you’re camp.”

The childless chancellor was never a vamp, nor has she visible camp potential, but, in keeping with Follies, an air of regret hangs over her final lap as German leader.

In her 14-year run she has seen dozens of leaders come and go and grappled with a staggering series of crises. But in a world where protectionist nationalism is on the rise once more, suddenly the level-headed German leader looks idiosyncratic.

The new world order is Trump’s Art of the Deal – better known as I win, you lose – and this is anathema to the Merkel method.

Her preferred approach took knotty problems, divided them into smaller, solvable parts and saw her work with others to find a workable trade-off.

The Merkel method always had its limits. Some critics say it favoured tactics over strategy; others complain that, when it counted, it consistently saw Germany give too little, too late.

And, just as two terms of Obama liberal polish didn’t halt the rise of Trump, blind spots in Merkel’s method contributed to the rise of far-right populism.

On Saturday, a day before big wins for the Alternative für Deutschland in her native eastern Germany, she travelled to Leipzig, where she once studied physics, to receive an honorary doctorate – her 19th.

Before the graduating class of the Leipzig Graduate School of Management, the chancellor delivered a thoughtful lecture about “value-oriented leadership”.

She never mentioned Trump by name but, five days after rolling her eyes at news of his upcoming German travel plans, it was clear who she meant.

Good leadership, she said, “doesn’t mean pursuing one’s own goals and interests without consideration of others but instead keeping in mind the bigger picture . . . over a longer period”.

Good leadership, she said, requires taking note of others’ convictions and interests and finding a space where compromise is possible.

Her weary conclusion: “Today, the space for finding compromise is often no longer easily found . . . because ambiguity . . . is no longer so valued.”

Don’t despise compromise. Compromise is what keeps society together

Her weary tone was picked up on by guest speaker Christine Lagarde, soon to swap the International Monetary Fund in Washington for the European Central Bank in Frankfurt.

She delivered a thoughtful and witty address about Merkel, a woman she has come to know well through many long crisis evenings. Noting that Leipzig is the city of Johann Sebastian Bach and his revolutionary Well-Tempered Clavier, she joked that Merkel would go down in history as the measured, methodical, “well-tempered chancellor”.

Like Bach’s mastery of mathematics and harmony, Lagarde suggested the German chancellor had mastered the Four D’s of public life – diplomacy, diligence, determination and duty.

“She deserves enormous credit for that . . . [and] it may sometimes feel as if she is playing in a solo,” said Lagarde. “But she never plays alone. We are all playing with her, and following her lead.”

Merkel’s fabled diligence ensured she was always the best-prepared person in any room and worked with determination to win over others. That skill was particularly necessary in the euro crisis, said Lagarde, when “Angela Merkel was working hard to bring the European orchestra together in this dark moment”.

Underpinning everything, Lagarde said, was Merkel’s profound sense of duty to preserve European prosperity and peace.

With the end of the Merkel era approaching in 2021 at the latest, there was an wistful air – or was it wishful thinking? – to Lagarde’s last lines.

“Nobody can see through the veil of time, but I sincerely believe that the music of Angela Merkel’s life will not only resonate with this generation . . . but with generations of people from all over the world,” she said.

The chancellor’s own parting advice to the Leipzig graduates sounded like a political plea: “Don’t despise compromise. Compromise is what keeps society together.”

Merkel – pastor’s daughter, physicist and supreme power politician – is still here. But as voters embrace leaders who despise compromise – and those who seek it – she is readying her departure with regret, a restless lioness in winter.