Mary Minihan: 'I suppose I had a kid’s-eye view of the Troubles from the back seat of the car' 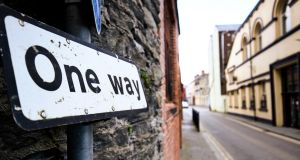 “Of course the inner-city community had it worst in Derry, but the Troubles brought terror to the suburbs and beyond too.” Photograph: Julian Dewert/iStock

All this talk of Brexit-induced checkpoints has me thinking back to drizzly mornings going to school in Derry.

Stuck in the tailback from the checkpoint on the bridge crossing the river Foyle from the Waterside to the City, Dad would thump the steering wheel and say, “I should have gone to Australia with Wee Joe”.

Wee Joe had been a teacher too, but he took off to the other side of the world, took up with an Aboriginal woman and sold fish out of the back of a van.

It was years before I understood that Wee Joe hadn’t gone on a flight of fancy to escape the rainy days. He taught metalwork, and a gang of republican men or boys had leant on him to put some craft on their crude devices. That wasn’t Wee Joe’s scene, or even close. So he left. His annual phone call to our house every Christmas evening was a big event. What year did Wee Joe stop ringing?

Everywhere there were amateur murals, both cartoonish and chilling, of balaclava-wearing IRA and INLA men brandishing weapons

But back to the bridge. When we eventually got to the checkpoint, RUC men would pointedly and, we thought, pompously, address Dad by name while wishing him a good morning. Mint-green sleeves, protruding from bulletproof vests, would then reach into the Datsun window for documents to confirm what they already knew.

I suppose I had a kid’s-eye view of the Troubles from the back seat of the car. Perfect for perfecting an expressionless face while watching British boy soldiers crouched on the side of the bridge in camouflage combats and huge laced-up boots, casually train the scopes of their long guns at us, or getting a too-close look at revolvers clipped neatly into holsters on policemen’s hips.

And that was just a checkpoint in Derry, in Northern Ireland. Crossing the Border to and from nearby Donegal was – well, let’s just say it was harder.

It was uncomfortable but, growing up, we didn’t know such proximity to weaponry was abnormal.

The first time I went to England and saw a regular British bobby on the beat, with his comical constable’s helmet and truncheon, I thought he was a character in fancy dress.

The sectarian political situation in Derry might have been complicated, but the message on the streets was so simple a child could understand it.

The writing on the paint-daubed walls told you touts would be shot, H-block could be smashed and Brits should most definitely be out. Even the kerbstones were helpfully tricolour-coded – for slow learners, if you like – painted mostly green, white and orange but, round some corners, red, white and blue.

Mum was in a breathless panic in the back room, gasping: 'That’s us finished now. We’ll be next'

Everywhere there were amateur murals, both cartoonish and chilling, of balaclava-wearing IRA and INLA men brandishing weapons. There were paintings of a black phoenix rising from stylised flames, with dates deemed too important to forget, but meaningless to us.

And the poignant mural of a white-faced boy in his school uniform, shot on the street by a British soldier and almost immortalised on a wall, along with the legend, “They call the killing of Stephen McConomy civil order”. When did they paint over that?

Grey police Land Rovers and green British army Saracen armoured cars lumbered around and helicopters hung over gardens, before taking off to watch someone or something somewhere else.

Of course the inner-city community had it worst, but the Troubles brought terror to the suburbs and beyond too.

At the end of one year, neighbours gathered in our house to wish a family from across the street well. They were leaving. Too-loud laughter filled the room after one neighbour said: “The things you do to avoid giving the binmen a Christmas box”, referring to the cash people used to tuck under bin lids as a festive gift to refuse collectors.

Again, it was years later that it finally occurred to me that the family had been moving out in a hurry.

The father was a Protestant and a policeman and the IRA had recently killed his next-door neighbour, a Catholic.

The night that happened a reporter had knocked on our door and Dad spoke to him, reluctantly, and certainly not on camera, talking out into the dark. Mum was in a breathless panic in the back room, gasping: “That’s us finished now. We’ll be next.” You couldn’t be speaking out about your neighbour being shot, for fear . . . Whatever you say, say nothing.

Back in Derry this summer, criss-crossing our frictionless Border taking kids to the beach in Buncrana in Donegal, I thought a lot about the indignities our parents suffered and the underlying sense of unease that infected almost all aspects of our younger lives. Even Boris Johnson shuddered at the sight of watchtowers. The thought of going back to that makes me sick to my soul.