Of course millennials take drugs but we’re not stupid 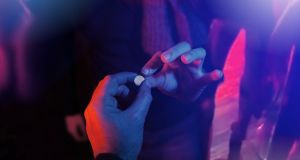 “On nights out, there’s no denying that people are on drugs. The vast majority are not out of control . . . the likelihood is that you would not even realise they are on drugs.” Photograph: iStock

The possibility of a plan to decriminalise small quantities of drugs has sparked predictable howls of outrage and siren warnings.

The proposal, backed by key Fine Gael figures such as the Taoiseach, Minister for Health and Minister for Drugs, could mean that if a person is caught carrying small amounts of cannabis, cocaine or heroin this would no longer be a criminal offence.

So, does this mean – as some suggest – that a new generation of young people are at risk of becoming drug-addled dropouts?

It’s time to get a grip. Decriminalisation would not provide younger people with a free pass to go wild. Nor would it create a culture of acceptability to take drugs freely, in any amount. It is vital to understand that decriminalisation is not legalisation. It’s simply about facing up to the harsh truth that people take drugs.

I’m a millennial and a member of a tribe regularly mischaracterised as whiny, entitled, self-absorbed brats. Older people, it seems, are forever fretting about our declining moral behaviour.

The reality is that we are a responsible generation that has compassion and empathy in abundance.

We have actively fought prejudice, challenged taboos and broken down stigmas – and the world has not fallen apart. Take the example of marriage equality, a campaign driven largely by the passion felt by 20-somethings.

It’s time now to change our approach to drugs. Evidence from elsewhere shows that an innovative approach to drug use can be successful. Look at Portugal, which in 2001 decriminalised the personal possession of all drugs. Since then, drug-induced deaths have decreased dramatically and drug use has declined overall among 15- to 24-year-olds, those most at risk of initiating problem drug use.

Essentially, Portugal decided to tackle drugs from a medical approach in the realisation that the criminal route was failing.

Yes, some young people may take MDMA to get a buzz at a festival. Chances are they are actually just looking for a release – and are back to work on Monday morning

In Ireland, a conviction resulting from an addiction – often caused by an underlying mental health difficulty – can easily turn into a lifelong vicious cycle. Let’s also not pretend that drug use ends at the prison gate. When someone has served their sentence, the support they need often is not available in a society that treats such problems with hostility. They will often struggle to find work and, without a job, are at risk of homelessness. Before they know it, they’re back behind bars and so it begins again.

It’s no secret that, in the past, Ireland’s approach to problems was “out of sight, out of mind”. It was much easier to lock someone up than to deal with social complications. Whether it was behind bars, in institutions or mother-and-baby homes, it’s an approach that has proved spectacularly unsuccessful. We are still living with that legacy today.

This week, I heard a person who works with people with addiction say that half of the students attending third-level education in Ireland use drugs. Do we think one in every two students should be treated as criminal?

With a criminal record, students face being denied entry to countries such as the United States, if they wish to travel on a J1 visa, for example. A criminal record would also damage their prospects of securing employment, even with a degree.

On nights out, there’s no denying that people are on drugs. The vast majority are not out of control, nor are they stupid enough to take such a large amount that they put their own lives at risk. In fact, the likelihood is that you would not even realise they are on drugs. People of all ages take drugs. It has been that way for years.

There are also predictable bouts of moral angst after festivals. And, yes, some young people may take MDMA to get a buzz at a festival. Chances are they are actually just looking for a release – and are back to work on Monday morning. I’m certain that there’s a better way to address this practice than throwing them behind bars.

When drug-taking becomes problematic, however, we need to intervene. If Ireland can take a health-based approach to drug use, it gives us the opportunity to respond early and to have a discussion on an equal footing. This would gives us the opportunity to assess why people are using substances and it gives us a chance to educate, to provide people with the treatment they need and, most importantly, a chance to be heard.

Too frequently this isn’t happening with our current, dysfunctional approach to dealing with the problem.