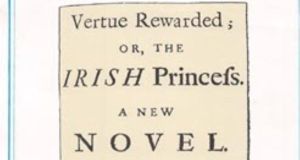 It is a truth, albeit not universally acknowledged, that Irish writers have always been amongst the masters of English literature.

James Joyce’s claim that “the best English” was spoken in lower Drumcondra could equally apply to much of the English prose and poetry that has been written in Ireland.

The first Irish novel written in English was set entirely in and around Clonmel, Co Tipperary, and it was published in London almost 50 years before a work with a near-identical title and plot that has been hailed as the first true English novel.

Vertue Rewarded; or, the Irish Princess, was published anonymously in London in 1693, some 47 years before the book that is usually regarded as the first novel in English, Pamela: or, Virtue Rewarded, by Samuel Richardson, a well-read London-based printer turned writer, who never acknowledged the Clonmel work.

The Irish Princess “is a work which has been almost totally neglected since its publication”, wrote Prof Hubert McDermott of NUI Galway in his introduction to the first reprinting of the novel.

“In compensation for three centuries of obscurity, however, Vertue Rewarded could yet find itself one of the most significant works in the canon of pre-Richardson fiction”.

McDermott wrote that “on the basis of both internal and external evidence that Vertue Rewarded has been shown to be a credible source for Pamela”. He said that “there is no other work of English fiction quite like either in the fictionally-fertile half-century 1690-1740”.

He claimed that the Irish book “can be seen as the prototype for later developments in English passionate romance”.

He acknowledged that the near-identical titles of the two books might be simple coincidence, but added: “no other work of fiction prior to 1740, as far as I am aware, contained ‘virtue rewarded’ in its title or sub-title”.

Both novels are short and both are said by their authors to be based on a true story. Both also employ a very similar narrative technique, while meeting the earliest dictionary definition of a novel – “a small tale, generally of love”.

In both, a beautiful and virtuous young woman of little or no social status falls in love with a prince or libertine who is equally besotted but whose wealth, rank and ambition make him desire only to seduce and debauch the chaste heroine, without having to marry her.

In the Irish novel, a European prince comes to Clonmel as part of the multinational army of William of Orange that was billeted there between the Battle of the Boyne and the Battle of Aughrim.

He first sees Marinda, “ a Beauty which fixed his sight, as if she alone were worthy of his attention”, while parading through the town with the army.

After contriving a couple of meetings with her, he agrees with his friend and valet that “twice of thrice more being in her company would ensure his conquest over her”.

And, although she has never heard of a prince marrying a maid, she makes clear to him that her innocence and virtue are dearer to her than life itself and that she will never yield, but on honourable terms – marriage.

The prince, though lovesick, is astonished when a fortune teller asks him if he has contemplated marriage. “Marriage”, he exclaims, “why did I not confess to you that she is a private gentlewoman, one beneath me? I wonder you should ask such a question”.

But the book’s title reveals its ending. After fewer than 100 pages, “the beautiful Marinda received the reward of her invincible Vertue, in loving and being beloved, and in having gained a Prince, who raised her quality as high (in comparison of what she was before) as a woman’s ambition could desire”.

The anonymity of the Irish novel’s author endures. Prof McDermott has suggested that it is likely to have been someone of planter stock, or possibly an officer in the Williamite army familiar with Clonmel and the events of 1690 and 1691. Only two copies of the book survive. One is in the Bodleian Library in Oxford and the other is in the British Museum in London, close to Russell Street in Covent Garden, where it was first printed, and also near Samuel Richardson’s home and printing works.

As well as providing a template for much romantic fiction in English, Vertue Rewarded is considered to be the first published Irish novel and is the earliest that is extant.