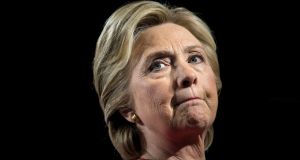 Hillary Clinton has revealed she considered including a universal basic income as a central policy plank in her 2016 election campaign. Photograph: Brendan Smialowski/AFP/Getty Images

In her campaign memoir What Happened, published this week, Hillary Clinton makes a startling revelation about what might have been the central policy plank of her US presidential election campaign.

Clinton relates how, before the campaign, she had read a book called With Liberty and Dividends for All: How to Save Our Middle Class When Jobs Don’t Pay Enough, by entrepreneur and environmentalist Peter Barnes.

In it, Barnes called for the creation of “a new fund that would use revenue from shared national resources to pay a dividend to every citizen, much like how the Alaska Permanent Fund distributes the state’s oil royalties every year”.

Hillary and her husband Bill Clinton were fascinated by this idea and, exploring whether it could be put in her campaign, spent weeks working with their policy team to see if it was viable.

They explored ways to build a fund to pay for such a basic income. They looked at how earnings which the state obtained by shared national resources including oil and gas extracted from public lands could be used and how fees for use of the public airwaves by broadcasters and mobile-phone companies would also be included.

Raising real money from the financial system by imposing a financial transactions tax was also examined, as were additional carbon and other environmental taxes.

They would have called it “Alaska for America”. Once you capitalise such a fund, Clinton writes, “you can provide every American with a modest basic income every year”.

As well as being a floor against poverty, Clinton says it would also be “a way of making every American feel more connected to our country and to one another – part of something bigger than ourselves”.

The Clinton campaign ultimately decided against making a universal basic income a campaign plank because they couldn’t make the numbers work.

“To provide a meaningful dividend each year to every citizen, you’d have to raise enormous sums of money, and that would either mean a lot of new taxes or cannibalising other important programmes. We decided it was exciting but not realistic, and left it on the shelf,” she writes.

While that was the responsible decision at the time, now, in light of her defeat, Clinton wonders whether “we should have thrown caution to the wind and embraced Alaska for America as a long-term goal and figured out the details later”.

In an interview on Wednesday with Vox’s Ezra Klein, Clinton said: “We dug deep, tried to explain it to some people, and it just was hard for people to grasp what we were talking about because most Americans . . . didn’t have any idea about what was going on in Alaska”.

She added that the taxes and funding lines from which a pot to fund a base income would be built would ideally be left to be decided by the legislature, on the basis of a cross-party consensus; but she, as the establishment candidate, would have been pressed for precise details and costings.

The idea of a basic income is not new. It has been tried in Manitoba in Canada and is currently being piloted in Finland and the Netherlands. A previous Brazilian government introduced a basic family payment as an incentive to getting children into education.

The scale of what Clinton considered was even more ambitious, however, and, as Klein put it, “the fact that a major-party [US] presidential nominee seriously considered basic income as a proposal is nonetheless a huge sign of the idea’s progress and increasing influence”.

The idea has been a slow-burner in Ireland also. Since the late 1980s Fr Seán Healy and Sr Bridget Reynolds of Social Justice Ireland have argued for such a basic income. They have shown in repeated publications how combining funding currently used for welfare payments and tax credits would get us to a modest payment to all.

They have gone further and identified the incremental steps that could be taken to that end by extending the State pension to all and making tax credits refundable. In 2002 they were part of the process by which the then Fianna Fáil government published a Green Paper on how it might be done.

There has been little progress since but the proposal re-emerged in Fianna Fáil’s last manifesto.

The debate around the future of work, increasingly vulnerable forms of employment and the rise of artificial intelligence has given urgent momentum to the debate, as has growing middle-class alienation from political systems.

The introduction of a universal basic income has the potential to transform how we organise the State’s role in our society and economy, and to shore up the support base for moderate politics.

Championing it in her 2016 campaign may have been a step too soon for Clinton, but universal basic income is an idea whose time has almost come.