Noel Whelan: A colourful Seanad but hopefully the last of its ilk 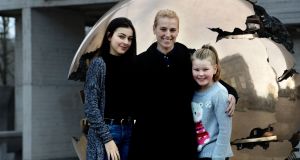 Lynn Ruane, President of Trinity College Students Union with her daughters Jaelynne and Jordanne. “She will be one of the most interesting politicians in the new Oireachtas, irrespective of how long it lasts.” Photograph: Cyril Byrne / THE IRISH TIMES

It is truly to be hoped that Seanad Éireann will never again be elected under the current absurd system. That said, the 2016 Seanad results have thrown up an eclectic mix of new, renewed or long-established politicians. In generational, geographic and ideological terms, it is a colourful mixture of political allsorts. Satirists, colour writers and those interested in diversity in politics will find much to interest them in our new Seanad.

The most dramatic shift in the line-up of the 43 Senators on the vocational panels was the Sinn Féin breakthrough. Its enhanced Seanad contingent includes former Donegal deputy Pádraig MacLochlainn, its Mayo Dáil candidate Rose Conway-Walsh and 22-year-old former mayor of South Dublin and LGBT activist Fintan Warfield.

The other striking feature of the vocational line-up has been the election of a significant block of Independents on the back of a strategy of encouraging Independent councillors to vote for one of their own. They came close to winning a seat on the cultural and education panel and, at the time of writing, look set to win one on each of the other panels.

Outgoing senator Gerard Craughwell, first elected by default after Fine Gael’s John McNulty withdrew in controversy from the 2014 byelection, was central to these co-ordinated efforts by Independents. Craughwell was elected comfortably on the Labour panel.

Also notable was the election of singer and anti- addiction campaigner Frances Black as an Independent with Sinn Féin support.

The Green Party got its first elected Seanad seat with Grace O’Sullivan, and Labour healed some of the pain of the Dáil election by getting former ministers of state Aodhán Ó Ríordáin and Ged Nash into the Seanad.

The Fine Gael shrinkage and Fianna Fáil recovery in both this year’s Dáil election and the 2014 local elections were reflected in the Seanad outcomes. For both it was a case of some old and some new. The return to Leinster House of former deputies Kieran O’Donnell, and Jerry Buttimer was important for Fine Gael, as was the election of new voices such as Dublin councillor Neale Richmond. On the Fianna Fáil side the election of new faces like Catherine Ardagh in Dublin South Central was important given the prospects of early Dáil election.

The personalities involved and the relatively larger number of electors always means that the election of the “university senators” get disproportionate coverage.

t appreciate the nature of these contests, however. They are essentially database elections. Winning a seat is not so much about a candidate’s policy or even profile but about their capacity to mine the list of graduates registered to vote for the relevant colleges and find a means to reach them. Incumbents have a massive advantage because they and their staff can focus, usually for five years, on identifying supporters who are already registered or getting supporters on to the register.

On the National University of Ireland panel Rónán Mullen was the only incumbent contesting this time. He has assiduously built a contact database with voters or would-be voters on the register and has been a strong voice for socially conservative causes. He comfortably topped the poll. Indeed, one in five graduates who voted this time around voted for him.

It was always obvious Michael McDowell was going to win a seat on this panel once he declared. To many he was one of the few recognisable faces on the very long ballot paper. In addition to his high profile he has an established base in the legal profession as well as the support of Feargal Quinn, Katherine Zappone and many others involved in the Democracy Matters campaign to retain and reform the Seanad. McDowell also appreciated that this was not just a media contest but required systematic working of the register.

While Pádraig Ó Céidigh, David Begg and Ellen O’Malley-Dunlop polled well on this panel the third NUI seat always looked like it was going to go to a left-of-centre and younger candidate. It

came down to a battle between former USI president Laura Harmon and the President’s daughter, Alice Mary Higgins. Both are from the Labour gene pool but ran as Independents. Higgins had the stronger network, which gave her a crucial edge.

On the Trinity panel David Norris and Ivana Bacik both sailed comfortably back to port. The other incumbent, Seán Barrett, who polled only 1,005 first preferences in 2011, had looked vulnerable in advance. Here the contest for the third seat also came down to two young women: the outgoing vocational senator Averil Power and Lynn Ruane, president of Trinity students’ union. Ruane’s is an extraordinary personal and now a political story. She will be one of the most interesting politicians in the new Oireachtas irrespective of how long it lasts.

1 ‘I’m so lucky to be in the Caribbean – a million miles from Derry Girls’
2 Michael Smurfit: ‘I asked Trump to invite me to the White House for my 80th birthday’
3 We need to pay very close attention to what is happening in Britain now
4 Covid-19: Two-week quarantine period for arrivals into State could be lifted for some
5 Sideline Cut: Vignette shows why Bird is the true shark in The Last Dance
Real news has value SUBSCRIBE