We all have an interest in reinforcing the taboo on chemical weapons. It is not just about Syria but also about deterring the next dictator from turning to sarin 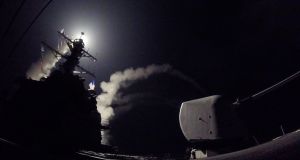 USS Porter launching a missile strike while in the Mediterranean Sea, 07 April 2017. The United States military launched at least 50 tomahawk cruise missiles against al-Shayrat military airfield near Homs, Syria, in response to the Syrian military’s alleged use of chemical weapons in an airstrike in a rebel held area in Idlib province. EPA/US NAVYEPA/US NAVY

President Donald Trump’s airstrikes against Syria were of dubious legality. They were hypocritical. They were impulsive. They may have had political motivations. They create new risks for the United States.

But most of all, they were right.

I’m deeply suspicious of Trump’s policies and competence, but this is a case where he is right and Barack Obama was wrong. Indeed, many of us believe that Obama’s worst foreign policy mistake was his passivity in Syria.

One of Trump’s problems is that he has lied so much and so often that he doesn’t have credibility at home or abroad in a foreign crisis like this. I likewise find it unnerving that he came to the right decision in an impulsive way, changing policy 180 degrees after compelling photos emerged of children gassed in Syria. Should a president’s decisions about war really depend on the photos taken?

Yet for all my distrust of Trump’s motivations and capacity to execute a strategy, here’s why I believe he was right.

Since the horrors of mustard gas during World War I a century ago, one of the world’s more successful international norms has been a taboo on the use of chemical weapons. We all have an interest in reinforcing that norm, so this is not just about Syria but also about deterring the next dictator from turning to sarin.

For an overstretched military, poison gas is a convenient way to terrify and subdue a population. That’s why Saddam Hussein used gas on Kurds in 1988, and why Bashar Assad has used gas against his own people in Syria. The best way for the world to change the calculus is to show that use of chemical weapons carries a special price — such as a military strike on an air base.

Paradoxically, Assad may have used chemical weapons because he perceived a green light from the Trump administration. In recent days, Rex Tillerson, Sean Spicer and Nikki Haley all suggested that it was no longer U.S. policy to push for the removal of Assad, and that may have emboldened him to open the chemical weapons toolbox. That mistake made it doubly important for Trump to show that neither Assad nor any leader can get away with using weapons of mass destruction.

Look, for a Syrian child, it doesn’t matter much whether death comes from a barrel bomb, a mortar shell, a bullet, or a nerve agent. I hope Trump will also show more interest in stopping all slaughter of Syrians — but it’s still important to defend the norm against chemical weapons (the United States undermined that norm after Saddam’s gas attack by falsely suggesting that Iran was to blame).

Critics note that Trump’s airstrikes don’t have clear legal grounding. They’re right, and that was one reason Obama didn’t act. But Bill Clinton’s 1999 intervention to prevent genocide in Kosovo was also of uncertain legality, and thank God for it. Clinton has said that his greatest foreign policy mistake was not intervening in Rwanda during the 1994 genocide; any such intervention also would have been of unclear legality — and the right thing to do.

There are risks ahead, of Russia or Syria targeting U.S. aircraft or of Iran seeking revenge against Americans in Iraq. War plans rarely survive the first shot, and military interventions are easier to begin than to end. But as long as we don’t seek to topple Assad militarily, everybody has an interest in avoiding an escalation.

It’s also fair for critics to highlight Trump’s hypocrisy, and raise concerns that he may have fired missiles for political reasons, to show himself as a leader and distract from political problems. Certainly Trump previously objected to what he is now doing.

Referring to Obama in 2013, he tweeted: “The president must get Congressional approval before attacking Syria.” And when Trump speaks about the suffering of Syria’s “beautiful little babies,” one wonders how he justifies vilifying and barring those same babies with his travel ban. Yet I’d rather Trump inconsistently do the right thing than consistently do the wrong thing.

Want proof that military interventions in the Middle East can work? In 2014, Obama ordered airstrikes near the Syria-Iraq border against ISIS as it was attacking members of the Yazidi minority. Those U.S. strikes saved many thousands of Yazidi lives, although they came too late to save thousands more who were killed or kidnapped as sex slaves.

In Syria, the crucial question is what comes next.

There’s some bold talk among politicians about ousting Assad from Syria. Really? People have been counting on Assad’s fall for six years now, and he’s as entrenched as ever.

Moreover, air strips can be rebuilt, and if this was a one-time strike then the larger slaughter in Syria will continue indefinitely. But I’m hoping that the administration may use it as a tool to push for a cease-fire.

As Secretary of State, John Kerry worked valiantly for a peace deal in Syria. But he had neither carrots nor sticks to offer. Kerry pleaded with Obama for leverage in the form of military strikes, but Obama refused.

Now the State Department finally has leverage. But, tragically, we seem to lack a secretary of state with the clout and inclination to seize that leverage and push for a peace deal.

My proposed course in Syria is the same one that Hillary Clinton and many others have favored: missile strikes to ground Assad’s small air force. This should help end the barrel bombs and make Assad realize that he has no military solution, and that it’s time for negotiation. The most plausible negotiated outcome would be a long-term cease-fire and de facto partition of Syria, putting off reintegration until Assad is no longer around.

Even if we can’t leverage military strikes into a peace deal, the strikes are still worthwhile by degrading the air assets that Assad uses to kill his own people.

Syria is a spectacular country redolent with history, and inhabited by a normally warm and hospitable people. Yet Obama’s well-meant caution has allowed Syria’s downward spiral to turn it into a symbol of brutality and suffering that has also aggravated the Sunni-Shia schism all over the world.

Because there was no good option on any given day, we always chose to do little or nothing. The result was that more than 300,000 people were killed, vast numbers were tortured and raped, almost 5 million refugees fled Syria and destabilized other countries, ISIS sowed terrorism worldwide, and genocides unfolded against the Yazidi and Christian communities in Syria and Iraq.

For all the legitimate concerns about the risks ahead, now again we just might have a window to curb the bloodshed in Syria. I’m glad Trump took the important first step of holding Assad accountable for using chemical weapons. But it’s all going to depend now on whether Trump, who so far has been a master of incompetence, can manage the far more difficult challenge of using war to midwife peace.