Niall O’Dowd: Why many Irish-Americans are turning to Trump

Donald Trump on his arrival at Shannon Airport to visit his golf course in Doonbeg, Co Clare in 2014 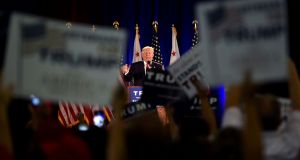 ‘The winged messengers of this new prophet are Fox commentators like Bill O’Reilly, Sean Hannity, Megyn Kelly, no surprise all Irish-American.’ Above, Donald Trump speaks during a rally at the San Jose Convention Center in San Jose, California, this week. Photograph: Josh Edelson/AFP/Getty Images

Suffocating political correctness, hatred of Hillary Clinton, admiration for what Donald Trump has achieved and a deep sense that America is slipping backwards seems to dominate feelings among Irish-Americans who will vote for Trump.

The belief among many interviewed for a poll by IrishCentral.com, responded to by 7,000 Irish Americans, is that America now is fading fast because of over-intrusion by government, too many handouts, minority mollycoddling and a fear of saying the wrong thing.

The poll showed Irish-Americans voting 45 per cent for Trump with 41 per cent for Clinton and the rest undecided.

The break with traditional ties to Democrats and Clinton is from a culture where pulling yourself up by the bootstraps has become a powerful belief. Most Irish Americans spoken with had experienced remarkable uplift patterns in their lives. Many were sons and daughters of second World War veterans, dubbed “The Greatest Generation”, who came home and signed up from the GI Bill and earned college degrees, unheard of in so many families.

Then they moved into the professional classes and out from the crowded cities to the suburban tracts such as Long Island, where they had their own homes and neighbourhoods that were mostly crime-free.

Their jobs, especially union ones, paid well, as retirement was hugely aided by social security and two-car families became the maxim. In a generation their worlds leaped forward generations.

Now they believe they see America moving backwards at a rate of knots. Quotas in universities, firehouses and police stations have affected them in once traditional Irish professions. Getting money for no work offends them (many strongly believe Mitt Romney’s claim that 47 per cent of Americans are on welfare). Government handouts are all seen as pecking away at what they considered their once-idyllic lifestyles, certainly in the rear-view mirror.

They’re also aware that in the recent bank meltdowns, they got left holding the baby while bankers prospered despite the crash. A strong feeling of lost identity in a vastly changed world has now become a powerful populist movement amazingly mirrored on the left by Bernie Sanders supporters. America left and right is mad as hell and won’t take it any more.

Then along came Donald Trump who seized the moment perfectly and ran an amazing campaign that articulated the prejudices and the dreams and catapulted him to being the Republican nominee, a scenario that top commentators openly laughed about six months ago.

Trump, as befits a publicity bloodhound, has his town criers, his adjutants who keep the masses informed of his every move.

The winged messengers of this new prophet are Fox News channel commentators like Bill O’Reilly, Sean Hannity, Megyn Kelly, no surprise all Irish-American.

All grew up in suburban America and all genuflect nightly at the Blessed Trump altar, even Kelly, though she became a prodigal daughter for a time.

Night after night too they pump out the same warning signals, America is falling apart, Hillary and Bill are kleptomaniacs who’d steal your kid’s communion money, minorities are crime-ridden, getting special treatment, illegals are overrunning the country, Trump is the only hope.

He would make America great again, they bay, just like Ronald Reagan did: the old ways would be back, a chicken in every pot, a job in every house, better wages, no more bankers squeezing the little guy, no more pesky foreigners sneaking into our beloved land. It is all very alluring.

Having attended Trump rallies to observe, and standing beside cops, firemen, teachers, factory workers and talking to them, you realise they are not bad people, just deeply disappointed. They are struggling with jobs and mortgages, their kid’s college tuition is as high as $50,000 a year, they are squeezed everywhere they look and they are ready to follow a new pied prophet.

But Trump is a deeply flawed vessel, something they fail to see. He is one of them the way that they are all part of the human race, but when he stands up with his fake pompadour and pluperfect family ranged behind him, the initial response I had was to laugh. He reminded me of the bully Biff from Back to the Future. Biff had more substance.

Unlike the great populists Huey Long, Al Smith or even James Michael Curley, he has no authenticity as a working-class hero delivering a populist message.

Yet they believe, the Irish in the forefront. Once upon a time there were no more loyal Democrats than Irish-Americans. The outreach by that party to the Famine-stricken when they came off the boats and the connection of many Republicans to the anti-Irish Know-Nothings seem to perpetually ensure that.

Except the tide has turned in recent elections, beginning with Ronald Reagan in 1980, when white ethnic voters known as the Reagan Democrats began to switch.

Judging from his rallies and Irish Americans I know, it is obvious The Donald has many Irish Trumpeters.

Why so? I asked two pro-Trump friends. Tim O’Regan a former senior executive with Xerox and now a volunteer fire officer and community activist in Breezy Point, whose folks came over from Monaghan and Cork, is emphatic why.

“Authentic! Trump is resonating with the people – educated and less educated alike.” Over this Memorial Day weekend I witnessed one of my highly-educated friends “coming out” of the shadows . . . proudly wearing a white, made-in-America “Make America Great Again” cap.

Should we be surprised that hard-working Americans (Irish or otherwise) have finally come to see the bullshit dispensed by career politicians (of both parties) as inimical to their being all they can be . . ?

Mike Mullen, a successful entrepreneur with roots in Clare, Cork and Galway who founded a successful software company that eventually employed 400, has very strong views on Hillary Clinton too.

“I cannot remember a time when the choices for president were so poor. But, given the poor choice, I will have to vote for Donald Trump. There are many reasons for me to be disenchanted with Mr Trump, but my opposition to secretary Hillary Clinton far outweighs any and all of the issues I have with a Trump candidacy. Indeed, none of my issues with Clinton is greater than the upcoming supreme court appointment to fill Antonin Scalia’s seat. I also think the Clintons (and without doubt Hillary) exhibit the lowest standards of integrity . . .”

It is clear that people will find a way to vote for Trump despite all his drawbacks. “Making America Great Again” is their sincerely held belief; the problem is they don’t see the message is being delivered by a modern-day Mephistopheles.