A 'win' in a border poll is not likely in the next few years, so why demand one? 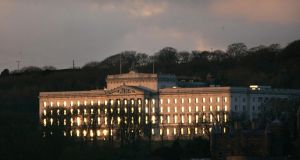 “During Stormont’s three-year collapse, Sinn Féin portrayed the crisis as a choice between restoring devolution or pushing on quickly for a [Border] poll.” Photograph: Dara Mac Dónaill

Monday marked one year since Stormont was restored by the New Decade, New Approach deal. There has been much comment this week in Northern Ireland on the successes and shortcomings of its implementation so far.

However, the reason the deal was struck is slipping minds north and south, judging by a burst of commentary on a Border poll.

8 Covid-19 advice sent by text to 1,511 arrivals from Brazil amid new strain

14 Nuns who ran the Bessborough home in Cork sold part of site for €6.85m

17 ‘I’m the meme queen’: A Q-Anon digital soldier marches on

18 ‘I got a burning smell in my nose’: Third-wave Covid-19 patients share their experiences

22 Joe Biden’s presidential inauguration: Where can I watch, and what are the key moments?

23 Vaccine should not be given to people close to death, says HSE

29 The Offload: Ronan O’Gara more than willing to take a punt on Jack Crowley

30 Homeschooling: How not to mess it up this time around

31 Book on disappearance of Noah Donohoe referred to Attorney General

37 Warming curry bursting with flavour but not the fat