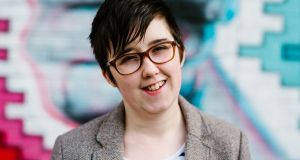 Murdered Belfast journalist Lyra McKee: just as her public-interest journalism was at the fringes of the mainstream media debate in the North, the issues she championed are also missing from recent talks. Photograph: Jess Lowe

In May, the British and Irish governments launched talks to restore the Northern Ireland Assembly, but we have yet to see any appetite to tackle deeper underlying problems.

The needs of political parties have long trumped the needs of communities in the North, but there might also be deeper reasons why the process seems “stuck”.

It’s important to recall that the governments were forced into action by the murder of activist and journalist Lyra McKee. Her work put a spotlight on communities “left behind” in the peace process. Those communities carried the heaviest burden of the conflict and still suffer the highest levels of deprivation.

But, just as McKee’s brand of public-interest journalism was sadly at the fringes of the mainstream media debate in the North, the issues she championed are also missing from the talks.

Real change is dependent on substantial efforts to help those “left behind” communities. But our failure to grasp that fact and to properly debate a new future may lie in a rarely discussed development: the decline of the news media in Northern Ireland.

After many rocky years of on/off government since the Belfast Agreement of 1998, the Assembly collapsed again in January 2017 and remains mothballed. It seems to be forgotten that it collapsed because it had become a byword for scandal and incompetence and a barrier to rights and fair play for large sections of the population.

Some feared the emergence of a weak “deal” with limited concessions on rights and a return of Stormont on a “business as usual” basis.

Such an illusion of change would do nothing for communities living in the grip of poverty and paramilitaries – but we all know this, so why is it not penetrating public debate?

We know that the same communities living in poverty in 1998 still suffer the heaviest burden of deprivation and mental ill-health.

We know academic selection for pupils at age 11 traps deprived children in poverty and stunts the economy, yet it remains in place.

We know that failure to fully address the legacy of the Troubles poisons the well and consigns the poorest, most traumatised communities to further misery.

How can we know all these things and yet still have a public discourse that seems ready to settle for a poor deal, or no deal at all?

Part of the answer may lie in how Northern Ireland society is informed by the media.

In the 1990s the search for peace was bolstered by public debates informed by a media landscape with strong, locally produced daily newspapers, independent radio news coverage and two major TV broadcasters.

Today we see a weakened media, where most newspapers are under pressure, where the commercial broadcaster UTV has reduced its investigative output and where debate is now dominated by the mammoth news operation of BBC Northern Ireland.

Despite the sterling work of other outlets, their budgets and outputs are a fraction of that of BBC NI, which therefore has a disproportionate influence over public discourse.

For all BBC NI’s undoubted talent, its public face is white and does not reflect the scale of diversity in Northern Ireland

This structural imbalance and lack of plurality should be a major concern in a deeply divided society.

Factors for a healthy public debate include that it must reflect the growing ethnic and racial diversity in the North, it must cover current affairs in the Republic of Ireland, as well as Britain, since both are interwoven with Northern Ireland life; and it must give sustained coverage to the factors that trap communities in the grip of poverty and paramilitaries.

But for all BBC NI’s undoubted talent, its public face is white and does not reflect the scale of diversity in Northern Ireland, its news coverage effectively stops at the Border with minimal reporting from the rest of the island, and for a variety of reasons it rarely produces the kind of content required to champion change for the disadvantaged “left behind”. These are particularly important considerations given BBC NI’s dominance.

If we are to overhaul our broken politics, we should start by debating how to rebalance our media landscape to put diversity and plurality at the heart of public debate.

The realities of diversity, cross-Border life, cultural difference and social inequality, have to be reflected to build a fair and just society. We have known that since 1998.

Steven McCaffery held senior editorial posts with the Press Association, the Irish News and the Detail. He works for the Belfast-based Social Change Initiative

1 Q&A: How long could it take to form a new government after Election 2020? Could things get messy?
2 David Baddiel comes to Ennis to meet a Holocaust denier
3 Love Island tribute to Caroline Flack hides the truth
4 Two Irish passengers on cruise ship test positive for coronavirus
5 €35,000 a bottle: most expensive Irish whiskey goes on sale today
Real news has value SUBSCRIBE