Maureen Mitchell: Bear Sterns and me

In March of 2008, I was a Senior Managing Director at Bear, a firm where I had worked tirelessly for a decade 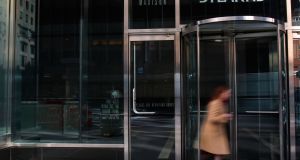 From my perch at Bear, I would never have imagined what the next decade would hold. (Photo by Chris Hondros/Getty Images)

A decade ago today, Bear Stearns failed, a harbinger of what came to be known as the Great Recession - the worst global economic calamity to hit since the Great Depression of the 1930s.

As we know now, the crisis was a long time in the making, and there were plenty of factors fueling it. Rampant liquidity (courtesy of a never-ending source of leverage)… reckless financial engineering… excessive valuations… an unrealistic belief in the ubiquity of US home ownership… rampant real estate speculation… commissions on mortgage originations… conflicted rating agencies… and vaporous underwriting standards - to name a few.

So many have asked, But were there no signs, no indicators?

Of course, there were. The real estate market had clearly reached its zenith and was beginning to wobble. Growing defaults, particularly in the subprime market, were accelerating: early evidence of the wreckage to come.

I experienced the official start of the meltdown from deep inside the financial industry. In March of 2008, I was a Senior Managing Director at Bear, a firm where I had worked tirelessly for a decade. Although my immediate response to Bear’s collapse was shock - and a quick and painful recalibration of my financial picture (the stock price had tumbled from its high-water mark of $170 a year earlier to $2 under JPMorgan’s original offer) - there was little time to dwell on either. The timeframe for merging the remains of Bear into JPM was exceptionally tight, and it was critical to execute well on behalf of our panicked clients.

And then there was the small issue of what was next for me professionally, how to navigate this disruption and find safe harbor.

I didn’t realize it consciously at the time (there were far too many fires to put out), but in finding my way out of the calamity, I was drawing on a deeper resource than savings or stature. It was my DNA, my ancestral background - the hard road my parents (both of whom immigrated from hardscrabble lives in Ireland) traveled on the way to working-class stability in mid-century New York City. They expected nothing and gave all they had.

Reflexively, I knew I would find the path forward.

Also, it’s worth keeping in mind that the market didn’t go into free fall until later that year - in September 2008, when Lehman Brothers failed. As a wise colleague remarked, we were the lucky ones: we went first. The job market was still strong, and what was once very expensive senior talent suddenly became “bargains.” Those who moved on without anger or regret made the most successful transitions.

From my perch at Bear, I would never have imagined what the next decade would hold. An eight-year run as the president of a division at GE where I was deeply involved in its global footprint, followed by advisory work with a global management consulting firm, and roles as a Corporate Director.

The global financial crisis left indelible marks. Looking back now, a decade on, it’s clear how profoundly the landscape of global business - the fabric of our lives, even - has changed.

Trust in our financial institutions was shattered, and I wonder if it will ever be restored. An over-reactive regulatory environment swung the pendulum to the opposite side - not unexpected, but it curtailed growth and nudged us back to a nation of renters. An entire swath of Millennials bears the scars of the recession, aspirations tempered in the wake of an achingly slow recovery.

But the vibrancy of the American spirit has shone through - fueled in no small part by the digital/wireless revolution and the energy of new generations. Dislocation spawned creative disruption, and the “sharing economy” emerged from the rubble. Embedded values of what we own, how we travel, work and commute have been challenged and continue to reverberate across the globe.

Equally important are the ways in which we have sought to reset our economic and moral compass.

Social impact, innovation, flexibility and purpose-driven enterprises have upended how we think about work. And while bubbles, greed and fraud will likely always be with us, the crisis also cast a bright light on corporate governance and risk management, with demands for more accountability from both regulators and the public.

Here, too, technology and the unblinking eye of social media have fueled deep change. Board oversight is, rightly, being scrutinized as never before. And the connection between diversity and improved governance and decision-making is finally (finally!) starting to be felt and understood. Women are beginning, albeit slowly, to gain a foothold in corporate board representation. Certain enlightened European countries have set quotas for gender diversity; in the US we are seeing companies like BlackRock and State Street take up the cause as well.

My decade at Bear prepared me for these opportunities, just as the global financial crisis has set the stage for today’s fundamentally different worldview. Bear’s culture forced a reckoning: it demanded that I secure my voice and own my ideas; that I continue speaking in a meeting as I was interrupted or talked over, and that I shed the pretense of courtesy in a tough compensation negotiation.

Simply stated, the experience made me “grow up”- demand a seat at the table, and effectively represent both my interests and the interests of those who worked for me.

As difficult as it was for me to experience the firm’s demise, I can honestly say that I am grateful for it all - what was learned, what was reformed, what was left behind. The crisis has reinforced a deeper truth, one that transcends the personal, one that I think we could all learn from. In good times and bad, resilience, regeneration and a wider worldview are the assets that count the most.

Maureen Mitchell is the former President, Global Sales and Marketing for the asset management arm of GE and serves on a number of boards