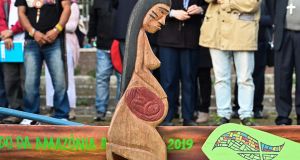 The Vatican criticised the theft from a church and discarding in the river Tiber of statuettes representing a pregnant naked woman. Photograph: Vincenzo Pinto/AFP

Two aspects of the Synod of Bishops on Amazonia made headlines: firstly, the cautious proposals to ordain married men with stable families in remote areas who are already deacons, and secondly the status of wooden statues of naked pregnant women.

Vital issues were downplayed . There was little attention paid to what the final synodal document called a “unique socio-environmental crisis” of exploitation of the Amazon basin. It has resulted in “drug trafficking, illegal armed groups, alcoholism, violence against women, sexual exploitation, trafficking in persons, the sale of organs, sex tourism, the loss of the original culture and of identity (language, spiritual practices and customs) and the criminalisation and murder of leaders and defenders of the territory”.

The Catholic Church has been a thorn in the side of the greedy who exploit the rainforest and its peoples for profit, through the industrial production of beef, gold mining, and oil and gas extraction.

Pope Francis has shown visionary leadership in his encyclical, Laudato ‘Si: On Care for Our Common Home.

There are many vested interests who would love to see the influence of the Catholic Church lessened, including Brazilian president Jair Bolsonaro, whose rhetoric has accelerated the exploitation of the Amazon.

Jesus preached more about care for the poor than about almost any other issue. A church that fails to care for the poor and marginalised is failing in a fundamental way. However, the church is not just some kind of a non-governmental agency with a social mission.

It rapidly sows the seeds of its own irrelevance if it is not rooted in a distinctively Christian worldview that emphasises our relationship with and dependence on God, from which flows our care for each other and a rich sacramental spiritual and prayer life.

The danger of being so accommodating to other cultures is that something distinctively Catholic is lost. It is probably why there was such a fuss about the carved wooden figures depicting a woman with an unborn child in her womb.

At a tree-planting ceremony in the Vatican during the synod, people, including a Franciscan, prostrated themselves before some of these images.

Pope Francis appeared discomfited. He abandoned his prepared remarks and instead led all those present in an Our Father. Were those in charge of the ritual worshipping idols? I doubt it very much. Was it deeply imprudent to prostrate themselves, a gesture universally recognised as worship? Absolutely.

It did not help that no-one responsible for Vatican communications could seem to make up their minds whether these were fertility symbols, images of Mother Earth or symbols of Our Lady of the Amazon. (That last title probably belongs to Our Lady of Nazareth, an image venerated, not worshipped, by two million Catholics in Belem in Brazil every October.)

Pope Francis compounded it by referring to the images as Pachamama, even though Pachamama is a goddess of the Andes, not the Amazon.

As for married priests, it may be the wrong solution to a deeper problem

Eventually, according to Crux online magazine,  Fr Fernando Lopez, a Jesuit member of REPAM, the Catholic Pan-Amazonian Ecclesial Network, said that the image had originally been purchased from a Brazilian artisan’s market in Manaus. When asked whether the tree-planting was a pagan ritual, he answered with a flat “no”.

But unwise as it might have been to prostrate before this image, how wise or loving was it to steal images of pregnant women and tip them into the Tiber?

Personally, I found it hard to stomach men throwing something into a river that honours woman as a creator of life, symbolised by the unborn child she carries.

As for married priests, it may be the wrong solution to a deeper problem, as highlighted by Fr Martín Lasarte, a Uruguayan Salesian priest invited by Pope Francis to the synod. While not closed to married priests, Fr Lasarte wondered why there was such a dearth of Amazonian vocations.

He compared two other biomes to the Amazon: the Indian Brahmaputra river and the African Congo basin. In 1923 in northeast India, there were only 1,000 Catholics. Today there are 1,647,765 Catholics in 15 dioceses with 220 languages. The ratio of priests to laypeople is an impressive 1 to 1,000. Similarly, in the Congo river area, which has faced many challenges and has 500 populations and languages, priestly vocations have grown 23 per cent in the past 10 years.

So, Fr Lasarte asks, why are there so few vocations in the Amazon? Even more pointedly, he asks why the Evangelical and Pentecostal Churches are thriving while the Catholic Church’s numbers there are plummeting?

If, as he suggests, there is a Catholic timidity about proclaiming a distinctively Christian message, then married priests, even in strictly limited conditions, will not begin to touch the problem.

This timidity about what is distinctively Christian ultimately undermines care for the earth, too, as Pope Francis has said again and again that what is needed is an “ecological spirituality grounded in the convictions of our faith, since the teachings of the Gospel have direct consequences for our way of thinking, feeling and living”. Increasing vocations and saving the environment will both be helped by one solution: the renewal of authentic Christianity.

1 Copper Face Jacks pays out €45.95m in dividends to owners
2 239 experts with one big claim: Coronavirus is airborne
3 What is Covid Tracker Ireland?
4 Coronavirus: HSE reports 500,000 downloads of new contact-tracing app since launch
5 Telling people not to travel overseas on holiday is wrong-headed
Real news has value SUBSCRIBE