If she loses small, she could get it to a second vote. If it’s big, all hell could break loose 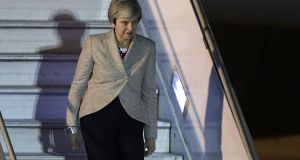 On the way down? A day of reckoning is fast approaching for Theresa May. Photograph: Juan Mabromata/AFP/Getty Images

Politics always looks forward, but the Brexit-shaped barrier ahead of Irish and British politics at the moment is preventing a clear view of the path to the future. Hence the aimlessness of the talks on the confidence-and-supply agreement between Fine Gael and Fianna Fáil; hence the general sense around Government and in Leinster House that everything is in a state of suspended animation.

That will begin to change at 7pm on Tuesday, December 11th, when the House of Commons votes on the deal Theresa May agreed with European leaders at the last summit. That’s when the next – and probably most chaotic – phase of Brexit begins. The vote will chart the immediate future of British politics. It will do the same in Ireland.

At present, there seems little chance that Mrs May could possibly win the vote and thus illuminate the path to the future. But while defeat is expected, what will be decisive, I think, is the margin of defeat. If she is defeated by, say, 100 votes, then it’s probably all over: Mrs May’s deal, and very possibly the prime minister herself, are finished. A prime minister losing a vote of such magnitude in the House should, of course, be finished. But in the Kingdom of Brexitania, the normal rules of politics no longer apply.

If the result is close – within 30 or 40 votes or maybe even 50, then Mrs May has a realistic chance of winning a second vote on the deal. So the margin of defeat is now the most important question in British – and Irish – politics. Losing big is very different to losing small.

The Guardian’s count on the current state in the House of Commons during the week was 414 against versus 225 for – a massive margin of 189 votes. So Mrs May needs 95 MPs to change their minds. She needs at least 50 or 60 to do so in the next 10 days. Tall order.

Her position is not hopeless, though. She has something to bring to the table and to the fight: she has a deal, she has the agreement of Europe, she has the promise of the transition period, and with it the certainty of avoiding immediate economic upheaval. Mrs May has something. Her opponents have nothing. In politics, usually, something trumps nothing. But she needs to stay alive long enough to make that advantage count. She has to survive the vote on Tuesday week and that means that the margin of defeat cannot be too big. For now, the numbers game at Westminster is all.

What happens if she loses small? Then she can go back to Brussels for the summit, which starts two days later, and promise a realistic prospect of winning a second vote – perhaps asking for a statement from European leaders that they will not keep the UK in the backstop indefinitely. She will not seek to have the treaty reopened. That won’t happen. But a statement from the leaders of EU governments, or some similar device (the EU has a bag of them, as we know), that offered some level of comfort to Mrs May on the exit mechanism from the backstop, could allow her to return to Westminster after Christmas and say: “We’ve tweaked the deal. We’ve answered your concerns. Now this really is the last chance.”

Such an eventuality would put enormous pressure on the Irish Government to concede a bit on the backstop.

If Mrs May loses big, there really is no telling what happens. If this represents a failure of analysis on my part, I take some comfort from several conversations with British journalists at recent EU summits and also with sources in Brussels, London and Dublin – nobody has a clue what will happen. The range of possibilities runs from a general election in the UK, a second referendum, a pausing of article 50 or all of the above. Or of the UK sliding chaotically towards a hard Brexit in March, unable to reach a consensus in government or parliament on how to stop it.

No sensible polity would do that to itself, you might say. But we can no longer rely on the UK to act according to the logic that seems apparent to everyone else. One example: there appears to be no end to the list of British institutions – the Foreign Office, the Treasury, the Bank of England – that hard Brexiteers such as Jacob Rees-Mogg and his comrades are willing to trash to attain their objective of “out and out now”. You could call this several things, but you couldn’t call it conservative.

The prospect of a full-on political and constitutional crisis in the UK is now very real. I never thought I would see anything like it.

Whatever the outcome of the vote on December 11th, the Irish Government is likely to come under immediate pressure to be clearer about its preparations for a no-deal outcome. Recent signals have been mixed. Everyone says we will avoid a hard border, but nobody seems to know how that might be done. That position is unlikely to stand up to much scrutiny after December 11th.

As we report today, secret Brexit planning in Government has gone into overdrive lately. After December 11th, the Government will have to tell people exactly what Brexit may look like and what they have done to mitigate the damage.

The day of the vote is the 87th anniversary of the passing of the Statute of Westminster, the law that enabled the dominions of the British empire – Canada, Australia, New Zealand and South Africa – to become self-governing nations, thus accelerating the process of transition from empire to Commonwealth. Next December 11th may well be no less historic.

1 Coronavirus: From midnight Dublin will move to level three until October 10th - Taoiseach
2 Wife not entitled to deceased husband's entire estate, High Court rules
3 Life in Level 3: What will happen under new restrictions in Dublin?
4 ‘We are shell shocked’: Dublin restaurants angry over indoor dining ban
5 President Higgins says British must face up to their history of reprisals
Real news has value SUBSCRIBE