Shock of no-deal Brexit would be immense – Bank of England

Britain risks suffering an even bigger hit to its economy than during the global financial crisis 10 years ago if it leaves the European Union in a worst-case Brexit scenario according to the Bank of England. Video: Bank of England 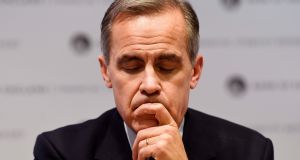 Bank of England governor Mark Carney: No-deal Brexit would be “a totally different situation than people have been living with and experiencing, certainly in advanced economies, for the last 30, 40 years.” Photograph: Will Oliver/EPA

A no-deal Brexit could plunge Britain into its worst economic slump since the second World War, with economic growth falling 8 per cent and sterling losing a quarter of its value, the Bank of England has warned.

The collapse in sterling, which the bank predicts would follow immediately after a cliff-edge Brexit next March, could push the Irish economy into recession and lead to major job losses as trading with Britain is disrupted and exporting businesses suffer.

Bank of England governor Mark Carney said the shock of a disorderly Brexit, with no transition period and customs controls at borders, would be immense.

“It is a totally different situation than people have been living with and experiencing, certainly in advanced economies, for the last 30, 40 years,” he said.

The bank’s report comes as MPs prepare to debate the Brexit deal Theresa May agreed with EU leaders in Brussels last Sunday. Labour leader Jeremy Corbyn said on Wednesday night that his party would table an amendment to the “meaningful vote” on the deal that would prevent a no-deal Brexit.

“The Tories have no right to inflict the chaos that would following crashing out of the European Union without a deal. That is why we will work with all sides in parliament to oppose no-deal,” he said.

The bank’s analysis of possible Brexit scenarios concludes that the prime minister’s deal would also lead to lower economic growth than remaining in the EU.

Its prediction for a no-deal Brexit is close to catastrophic, however, with sterling quickly losing 25 per cent of its value to fall below parity with the dollar. Economic growth could fall by 8 per cent in 2019 and by 10.5 per cent over five years.

House prices could fall by 30 per cent and commercial property by 48 per cent in the years following a no-deal Brexit, with unemployment almost doubling to 7.5 per cent. Mr Carney said British banks were sufficiently well capitalised to cope with even the worst-case Brexit scenario but British businesses were less prepared.

“To be clear, the bank being ready for Brexit is not sufficient to guarantee a particular economic outcome,” he said.

“There is little monetary policy can do to offset the potentially significant hits to productivity and supply that Brexit could entail, but the bank’s unwavering commitment to price and financial stability will support the necessary adjustment of the real economy.”

Earlier a British government analysis concluded that the British economy would grow at a slower rate under any Brexit scenario than if the country remained in the EU. It found that the damage caused by Mrs May’s Brexit deal would be less severe than all other scenarios apart from remaining in the European Economic Area (EEA) like Norway.

A number of Irish economic studies have estimated the impact of Brexit on the Irish economy, with a loss of 4.5-7 per cent of GDP predicted in the case of a harder Brexit, but with the losses spread over the next decade.

The striking aspect of the Bank of England forecast is the scale of the immediate hit it estimates for the UK economy. This would happen because the bank assumes that, in a disorderly Brexit, the UK would immediately face significant new trade barriers and disruptive delays.

The Bank of England analysis suggests that Ireland could also face the economic costs of a no-deal Brexit very quickly. Some 13 per cent of Irish exports go to the UK, but this rises to 40 per cent in the employment-intensive food sector.

Exporters would be hit hard by the predicted collapse in the value of sterling, while the food sector would also be particularly exposed to tariffs on products such as beef and dairy.