Northern Irish students on Brexit: ‘The Republic has become a more attractive option’

Simon Carswell speaks to a group of second level students from Belfast's Methodist College on Brexit and what it means for them. Video: Bryan O'Brien 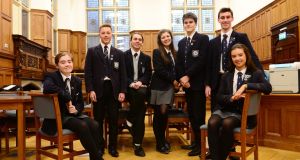 Methodist College in Belfast – better known as Methody – is an interdenominational, co-ed grammar school located at the bottom of Malone Road in Belfast, next to Queens University. Founded by the Methodist Church in 1865, it has a long-established academic and sporting pedigree in Northern Irish second-level education and is ranked among the top schools in Northern Ireland and the United Kingdom.

Joni Mcilroy, who is 18 and from Newtownards, Co Down, says she is Northern Irish. She grew up in a non-religious household. She wants to study politics in the United States.

Jonathan ‘Jonny’ Mearns, an 18-year-old from Dunmurry, is a Protestant unionist and identifies as British. He would like to study politics at Queen’s and eventually set up a new conservative political party.

Izaak Carnduff, who is 17 and from Bangor, Co Down, identifies as Irish. He comes from a nationalist background and is non-denominational. He hopes to go to university in England next year.

Hala Heenan, who is 17 and from south Belfast, is a Catholic nationalist but is not overtly religious. She identifies as Irish. She hopes to study history at university abroad and to return to live in Belfast.

Adam Flanagan, a 17-year-old from south Belfast, is a Protestant unionist and British. He wants to study economics in Britain and to return to Northern Ireland to work in business and, later, possibly politics.

Shannon McKeown-Gilmore, also a 17-year-old from south Belfast, is a Catholic nationalist and Irish, though she is not religious. She has applied to study law in England and hopes to become a barrister.

Jake Lowry, who is 17 and from east Belfast, is a Protestant unionist and British. He hopes to study politics and international relations in England next year and would like to be a civil servant or diplomat.

Six out of the seven students raise their hands.

Do they think there will be agreement on a smooth exit by the UK from the EU?

None of the seven students puts up their hand.

This group of 17- and 18-year-old students, are all in their final year at Methodist College in Belfast and are thinking seriously about their future education and careers. They sat down with The Irish Times to discuss Brexit and what it means for them and Northern Ireland.

The discussion takes place as the draft divorce deal emerges and stirs divisions in Northern Ireland, Britain and beyond. The political consequences of a no-deal, disorderly Brexit are huge; five students, including one unionist, believe Brexit could result in a united Ireland in their lifetimes.

Just two of the students have Irish passports but some of the others, and their family members, are applying because of the potential restrictions on travel after the UK quits the EU in March 2019.

Even the only student who supports Brexit within the group, Jonny Mearns, a Protestant unionist, says he might consider an Irish passport if it became very difficult to travel.

For these seven students at Methody, Brexit has reopened a complex debate about nationality and identity politics that the Good Friday or Belfast Agreement – negotiated two or three years before they were born – attempted to settle.

Why are you in favour of Brexit?

Jonny The money the UK puts into the EU could be spent elsewhere, particularly education. Britain is much better off using that money and trading with the EU or the rest of the world on its own terms.

And why are you against it?

Joni It is kind of a regression of ideas to combat globalisation, which I think is impossible anyway. I am not really sure what it is achieving. The main things at the beginning were immigration, sovereignty; I am not really sure how we are going to gain those things through Brexit.

Izaak It is breaking up different people, different countries and it will make it a lot harder for students and people early in their lives to get as many opportunities as they do right now.

Why are young people in Northern Ireland particularly affected by Brexit?

Why are you so downbeat about a deal on Brexit?

Shannon I don’t think it will be a deal that everybody wants or agrees with. It’ll be a very middle-ground deal trying to please as many people as possible and ultimately will do the complete opposite.

Would you consider getting an Irish passport?

Jake I live in a predominantly unionist area and in fact the post office ran out of Irish passport application forms within days of the Brexit vote, so there is a real appetite because of the uncertainty.

Joni Our Irish passport forms are in the post. I have always wanted to travel loads so it is pretty crucial that you are not held up in loads of different queues. It was a bit of a no-brainer really.

Jonny There are a lot of unionists taking up that opportunity but I just think the border question in terms of travelling from France to Britain, having control over our own border, is more important to me than being able to walk through a line at the airport.

Adam The rulebook of identity in Northern Ireland is almost being torn up by Brexit. There were people who five years ago would have thought it unthinkable to get an Irish passport but they think it now just makes sense. As a Northern Irish unionist, I think that’s what makes Brexit most frightening. If we continue barrelling down this uncertain path towards Brexit, it genuinely calls into question unionism in Northern Ireland and Northern Ireland’s very existence ultimately as well.

Are you concerned about a hard border post-Brexit?

Hala It is a worry for my family because we have a house just across the Border. Are we going to have to bring our passports or other ludicrous questions like that? It is usually a quick 45-minute trip down the road. When travelling in the car, there is a little pole with a little red stick on it. That’s how you know you have crossed the Border.

My mum and dad recount the tales of when you used to have to stop and open the boot of the car and there would be army checks. Now there is such an ease of travel. It instils quite a big fear inside me that there is a very small possibility that that might come back.

Has concern over a hard border and a return to violence been overplayed?

Adam Any hard border or any hardening of the border, even whether it avoids a totally hard border, is certainly dangerous in that it could risk a return to violence. Whether that would be the case, no-one can foresee that but I think the risk of that isn’t a price worth paying.

Are the 56 per cent who voted Remain in Northern Ireland represented at Westminster?

Shannon The DUP – because of their own personal interest, they were obviously a pro-Brexit party – are not recognising that the people of Northern Ireland voted to remain.

Jake The DUP are a Eurosceptic party. They campaigned for Brexit and Sinn Féin unfortunately don’t take up their seats so how can they advocate for the people of Northern Ireland if they refuse to go to Westminster. It is the issue of symbolism. Sometimes you have to put pragmatism before symbolism.

Will Brexit force Northern Ireland out of the UK?

Izaak If a “no deal” Brexit was to occur due to chaos from an event such as the DUP pulling the rug out from under Theresa May’s government, then I could potentially see a fracturing of the union that would cause Northern Ireland to splinter off from the UK.

Jonny Despite Northern Ireland voting Remain, it is highly unlikely that many of those who voted Remain but identity as British would be willing to sacrifice the union for the sake of remaining in the EU.

Joni It seems that unionists in the North are too adamant in their support of the union to concede, and southern nationalists don’t feel strongly enough for Northern Ireland to leave the union at this moment in time. Yet the uncertainty created by Brexit and the changes in Northern Ireland suggest that the prospect is not as far-fetched as it once was.

Could Brexit result in a united Ireland in your lifetime?

Hala If the backstop [the Brexit deal guarantee maintaining an open border] were compromised in any way, and Northern Ireland’s fortunes relative to the rest of the UK were not as good – and if the Irish economy continues as a EU star performer – then it may begin to make more economic sense to people.

Jonny Brexit could perhaps result in a united Ireland, but it is improbable. It would have to take Brexit to be a catastrophe before even thinking about this, which I do not for one moment believe will be the case.

Joni The Republic has become a much more attractive option. Its transition into a secular, modern society has made it a very attractive option for younger voters, and [its status] as the fastest growing economy in the EU means business can longer be used as an argument against reunification in the way it once was. While several stumbling blocks to a united Ireland have been reduced, the most important still remains: identity.

Jake A no-deal Brexit would expedite any potential unification of Ireland. Regardless of the actualities of such a scenario, the symbolic significance of a hard border could galvanise moderate voters and pro-EU unionists to turn to Irish nationalism as their solution to a no-deal scenario. Of course, that wouldn’t be a sudden change in thinking but something that would perhaps develop over the decades to come.