Macron is no saviour of Europe 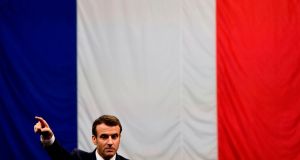 Humility is not Emmanuel Macron’s defining characteristic. He has an approval rating of about 34 per cent in France, which is 10 per cent lower than Donald Trump’s average approval rating in the US. Undaunted, Macron has undertaken a series of town hall-style meetings across France to hear his citizens’ concerns. He has also issued another document outlining a vision for the EU.

Meanwhile, Michelle Bachelet Jeria, UN High Commissioner for Human Rights, this week urged full investigation of all reported cases of excessive use of force in France against protesters, just two weeks after the Council of Europe Rights Group demanded that rubber bullet launchers no longer be used against the gilets jaunes (yellow vests).

There are about 162 complaints being investigated against police across France including the loss of hands, limbs and eyes.

The police have been far from unscathed themselves. The yellow vest protests have often been violent and aggressive, with scores of cars set alight and businesses ransacked. The latest tactic has been to fire excrement and sometimes acid at police. Broken bottles and concrete blocks have also been used by protesters.

But the use of rubber bullets should have a particular resonance in Ireland.  Have we already forgotten people like Richard Moore, the founder of charity Children in Crossfire, who was blinded in 1972 by a rubber bullet when a British soldier fired one from a distance of 10ft as Moore ran past a lookout post? In the same year, 11-year-old Francis Rowntree was killed by a rubber bullet in Belfast. When the British forces replaced rubber bullets with plastic rounds in 1973, a further 14 people died, half of whom were children.

The French continue to insist the weapons they use for crowd control, including the notorious “flashballs” are non-lethal.

While violent protest is never justified, arguably the yellow vests’ protests would never have happened at all if people struggling to make ends meet had not felt so ignored in their own country.

From the beginning, Macron was dubbed the “president for the rich”, with more than a little justification. While Macron’s attempt to take action on climate change was laudable at one level, it made the fatal mistake of heaping the burden on those least able to pay. France has one of the highest levels of unemployment in the EU.

While violent protest is never justified, arguably the yellow vests’ protests would never have happened if people had not felt so ignored in their own country

Macron was reduced to firing money at the problem. Belatedly, the monthly minimum wage has risen by €100 and elderly people no longer have to pay a controversial tax on pensions. This largesse puts him in the same economic league as the Italians – breaching EU fiscal targets.

None of this deters Macron from declaring the way forward for Europe. It seems very few commentators are willing to ask the pertinent question: if your own citizens think you are arrogant and out-of-touch, what gives you the right to pick up the mantle soon to be set aside by Angela Merkel?

Macron is one of a new breed of leaders – mediagenic and invested in rhetoric. Such leaders should perhaps meditate on the fate of Tony Blair.

Certainly, some of the illiberal forces emerging in Europe are frightening, with disturbing echoes of the 1930s. But is the correct response always more European institutions?

Macron proposes a European agency for the protection of democracies. He wants a common border force and European asylum force under the authority of a European council for internal security. While drawing back from an explicit reference to a European army, he wants “increased defence spending, a truly operational mutual defence clause, and the European Security Council with the United Kingdom on board to prepare our collective decisions”.  He wants a European climate bank and a European Food Safety force.

In short, he wants an expansion of EU powers in exactly the kind of way that makes many Europeans feel alienated.

It is essential that climate change receives a continent-wide response. No one is suggesting Macron is wrong about everything. It is possible to be apprehensive about the constant expansion of EU powers while remaining a good European.

The EU’s biggest problem is that its scale makes it impenetrable to the average European. There are 512.6 million people in the EU.

It is impossible to build a sense of a polis, or a real sense of a democratic space. There are 24 official languages (and more than 60 actually spoken) even though the big three – English, French and German – dominate proceedings.

Realistically, how can you build a sense of community or identity with such a vast entity? It is no wonder that the European elections are often used simply as an opportunity to register a protest.

Macron has no feeling for the left-behinds and those for whom globalisation is a net negative rather than a positive. By dismissing people who vote for strongly nationalist parties and those who voted for Brexit as simply deluded victims of fake news, Macron exemplifies precisely the elitist and privileged attitudes that fuel disillusionment. But it is always so much easier to dismiss dissent than to make the effort to engage with and understand it.

1 Mother of McGinley siblings arrested on suspicion of murder
2 Claim withdrawn after court shown video of man walking without wheelchair
3 Billie Eilish: Her stance that her body is not public property is still a radical act
4 Catherine Noone’s apology over autism comment ‘good enough’, Taoiseach says
5 No obvious signs of injury on remains of McGinley children
Real news has value SUBSCRIBE