Algeria’s gerontocracy may have had its day

Unlike in 2011, the Bouteflika regime cannot simply throw money at the problem 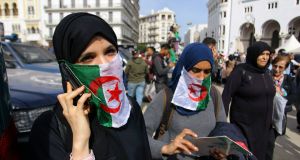 Hundreds of students gather to protest the decision of Algerian president Abdelaziz Bouteflika (82) to run for a fifth term, in Algiers, earlier this week. Photograph: Anis Belghoul/AP Photo

The 250,000 US diplomatic cables dumped online by Wikileaks in 2010 – a vast compendium of intelligence, insight, gossip and idle speculation – remains by far the richest haul of near-contemporary source material we have on modern diplomacy. At one end of the spectrum, we learned, America’s diplomats spent quite a lot of time reporting the blindingly obvious back to Washington. The revelation that the real power in Russia was held by then prime minister Vladimir Putin or that Nicolas Sarkozy was a narcissist hardly warranted their SECRET stamps.

At the other end of the spectrum were cables that showed acute analysis and even prescience. In 2008 the US mission in Kiev anticipated Russian military action in Ukraine if Moscow felt the country was falling into the West’s orbit, while around the same time US diplomats in Tunisia reported on the rising anger of the country’s young people and the grotesque extravagance of the Ben Ali regime – the same one that would be ousted by a popular revolt in 2011. But the cables also showed that even the world’s superpower found some governments impossible to figure out. Tunisia’s neighbour, Algeria, was a good example. It turned out, reading between the lines, that the US government struggled to grasp exactly who was running Africa’s biggest country. The embassy reported that the powerful Algerian military was prickly and paranoid, and remarked that the state was riddled with corruption. That was hardly news.

But the cables from Algiers contained two observations that are worth revisiting nine years on. First, the mission reported that, according to its contacts, the Bouteflika regime was “fragile in ways it has not been before” and that there were “rumblings of division” within the military rank and file. Second, in a 2008 dispatch, it commented at length on disaffected Algerian youth – in particular young, educated men who were burning their identification papers before setting off on rickety boats on a perilous journey to Spain or Italy, such was their sense of hopelessness at home.

For the past two weeks, a wave of protests has swept the country, bringing young and old on to the streets

Algeria was barely touched by the Arab Spring protests that toppled autocratic rulers across the region three years later, in 2011. That was partly because of generous subsidies the regime used to calm economic tensions. Also, many Algerians had fresh memories of the bloodshed the country experienced in the 1990s, when an estimated 200,000 people were killed after Islamists took up arms after the military cancelled elections they were poised to win.

But for the past two weeks, a wave of protests has swept the country, bringing young and old on to the streets in a rare show of public defiance. The spark was the announcement that the ailing 82-year-old Abdelaziz Bouteflika, who is reportedly unable to speak or walk and has seldom been seen in public since he suffered a stroke in 2013, planned to seek a fifth term in next month’s election. To many Algerians, it felt like the final insult.

The regime is clearly rattled by a movement that began online, has no organiser and is not linked to any established opposition group. A drop in global oil prices has forced the state to cut back social spending, with the result that, unlike in 2011, it cannot simply throw money at the problem. Bouteflika last week issued a public letter (he is said to be in Geneva receiving medical treatment) announcing that he would step down within a year if re-elected. But the protesters have said their peaceful demonstrations will continue until their demands, including his immediate departure, are met.

Bouteflika’s candidacy may reflect inability within “le pouvoir”, as the shadowy political-military nexus at the heart of the ruling structure is known, to agree on a successor. For decades, Bouteflika, a veteran leader of the independence struggle, has held together the network of actors – oligarchs, generals, intelligence chiefs and his own National Liberation Front (FLN) party – whose interests are carefully balanced in the power structure. He also appears to have actively worked to ensure there were no viable successors waiting in the wings. Whatever the reason, the regime remains adamant that Bouteflika’s name will be on the ballot paper next month.

Some have likened the protests to the Arab Spring – a reductive comparison that fails to account for the specifically Algerian factors at play, as Andrew Lebovich, a north Africa specialist at the European Council on Foreign Relations, points out. But the regime is right to worry for its future. Seventy per cent of Algeria’s population is under 30 years old. To many of those young people, Bouteflika symbolises the tired gerontocracy that holds them and their country back. Their parents may have tolerated a closed, impenetrable political system as the price for relatively peace and stability. The scenes on the streets of Algerian towns and cities this month suggest they won’t.