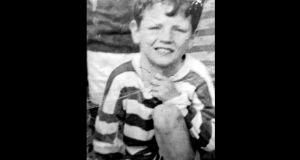 The killing of a boy shot by an army rubber bullet in Belfast in 1972 was not justified, a coroner has ruled.

Mr Sherrard said the soldier was not given any training in the use of the bullets or made aware that they were potentially lethal.

“There was no justification for the use of lethal force at the time that Francis was shot,” Mr Sherrard told Belfast Coroner’s Court.

“The force used was in excess of what was needed to achieve Soldier B’s objectives.”

Francis was the first person in the Troubles to die after being wounded by a rubber bullet.

The incident occurred in the Divis Flats area of the city on April 20th. The child, who was a pupil at St Finian’s Primary School, was shot in the head and died two days later of his wounds, which included skull fractures and lacerations of the brain.

The incident happened amid claims a group of people were rioting and throwing stones at the soldiers in a disturbance in the area.

Outlining the preliminary findings, Mr Sherrard said he was confident Francis was not involved in rioting.

It has been disputed whether the boy was struck directly or hit by a ricocheting rubber bullet.

Following an investigation by the Historical Enquiries Team in 2010, a fresh inquest into his death was ordered.

The soldier who fired the bullet has been granted anonymity during the inquest and was known only as Soldier B. He told the court he did not remember the exact day in question.

Eyewitnesses, including a lieutenant instructing the soldiers, told the court a crowd gathered around a vehicle carrying a number of soldiers which stopped in the area.

A disturbance followed in which some members of the crowd became hostile and threw objects including stones at the vehicle.

The court was told a number of youths were among the crowd, who had come to watch the disturbance out of curiosity.

The court was told two rounds of rubber bullets were fired by a soldier into the crowd in a bid to disperse those present, and that one of the bullets hit the boy’s head. No warning was given before the shots were fired.

He said the soldier was given the gun, which fired rubber bullets, without being made aware that the weapon could be lethal or given appropriate training in how it should be used.

Mr Sherrard said the Ministry of Defence should have been aware by the time of the incident that rubber bullets could cause serious harm, due to prior evidence emerging after tests were carried out using the guns on anaesthetised sheep which flagged up numerous concern about their potential impact.

A further test on skulls conducted four months prior to the 11-year-old’s death showed three of five skulls were severely damaged by the bullets in one test exercise.

Mr Sherrard also said evidence suggested the guns which fired the rubber bullets were designed for use by soldiers to operate while standing up and holding them at waist height.

However, they were given to soldiers for use inside military vehicles in which they were in crouching positions due to the vehicles’ height.

He said: “The state provided Soldier B with a lethal weapon without notifying him of its potential lethality or training him in its use.

“The absence of adequate training made it impossible for Soldier B to assess whether to use lethal force.

“I am satisfied that the established lethal risk was not adequately communicated to troops on the ground.”

“He fired without warning into the crowd, which was not aimed at any individual.”

The coroner also said he was confident the boy had not been involved in any rioting on the death of the shooting.

He said: “I am entirely satisfied that Francis was not involved in any rioting nor did he intend to become involved in any. I am quite sure of that. It is clear he was there to observe the disturbance.”

The coroner is due to consider further matters including the soldier’s anonymity, before delivering his final findings in the inquest. He told the court he expects to give the full findings by the end of this year.

The Rowntree family welcomed the findings.

A statement, issued through their solicitor Padraig Ó Muirigh, said: “The Rowntree family welcome the findings of Coroner Sherrard today relating to the death of Francis Rowntree on the 22nd April 1971.

“The Coroner confirmed that Francis was not rioting at the time he was shot and that the lethal force used was ‘not justified’.

“Significantly, the Coroner also found that the rubber bullet, which was classified as a ‘non-lethal weapon’ was in fact a ‘lethal weapon’.

“Further, the terrible wounding potential of these lethal weapons was known to the state before Francis’s death.

“Many young children were killed and maimed by the rubber bullet and its successor the plastic bullet. Their use, free from regulation and training, amounted to a systemic abuse of human rights.

“These findings are not only a legal victory for the Rowntree family but for all those who campaigned for many years for these lethal weapons to be banned.” – Press Association