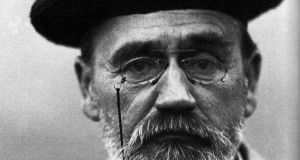 Émile Zola: began ‘Germinal’ on April 2nd, 1884, and finished in time for publication the following spring

‘April is the cruellest month,” claimed TS Eliot in The Waste Land, although the things he blamed it for – the blooming of both flowers and sexual desire – are usually considered among its plus points. Shakespeare, in his Sonnet 98, expressed the more conventional view: “Proud-pied April, dressed in all his trim/Hath put a spirit of youth in everything.”

For Thomas Carlyle, fickle weather made this time of year a mixed blessing: “Long stormy winter, wet contentious April, winter chilling the very lap of May”. And of course, more prosaically but with gloomy portent, George Orwell used the month as backdrop to the opening line of his most famous novel: “It was a bright cold day in April, and the clocks were striking thirteen.”

Two centuries later, it’s as yet unclear how the April Fool tradition will adapt to the era of year-round fake news

As events between now and midnight may remind us, it’s not just love and flowers that are regenerating. Charles Lamb once wrote of this date: “Here cometh April again, and as far as I can see, the world hath more fools in it than ever”.

Two centuries later, it’s as yet unclear how the April Fool tradition will adapt to the era of year-round fake news. But in the meantime, the real news from Trumpworld has been disturbing enough to revive readership of the aforementioned Orwell novel, while also suggesting strongly that Charles Lamb’s observation could still hold true today.

Nobody seems to know where or when the April Fool phenomenon originated.

Volatile weather and proximity to Easter have both been credited at times. And yet as Brewer’s Dictionary of Phrase and Fable points out, similar tricks are played during the Holi Festival (March 31st) in India, where neither explanation could apply. It suggests instead an ancient Roman origin, from the celebration of Cerealia, which also happened at this time of year. Thus the original April Fool’s prank may have been a mythical occasion when the goddess Proserpina was sporting in the Elysian meadows, picking daffodils, until Pluto appeared and carried her off to the underworld (the rascal), leaving her mother Ceres to search for her screaming daughter in vain. It probably seemed funnier at the time.

Show my head to the people – it is worth seeing

In the French republican calendar, late March and early April became Germinal, the “seed” month. That calendar didn’t last long. But, like Thermidor (mid-July to early August), Germinal survived it as shorthand for one of the revolution’s more turbulent events.

On the equivalent of April 5th , 1794, the journalist and politician Camille Desmoulins and his friend Georges Danton were guillotined for alleged conspiracy to overthrow the government, with Danton famously telling his executioner: “Show my head to the people – it is worth seeing.”

It was the height of the “Reign of Terror” and led to the Thermidorian Reaction, in which chief terrorist Robespierre was in turn executed. But the other reason Germinal is still remembered today was Émile Zola, who almost a century later, used it as the title for his greatest novel. Set in the 1860s, Zola’s Germinal describes a coalminers’ strike in a French northern town, and presents a very grim portrait of the plight of the French poor, a century after the revolution. In desperation to improve their miserable lives, they suffer only further brutality. But out of the book’s bleakness, the author strikes a note of optimism in the closing lines: “Men were springing forth, a black avenging army, germinating slowly in the furrows, growing towards the harvests of the next century, and their germination would soon overturn the earth.”

Zola began the book on April 2nd, 1884, and finished in time for publication the following spring, to enormous success.

Although the 13th in a sequence of novels, to which he would add another seven, it was soon enshrined as his masterpiece. Translated into many languages, and still widely read, its influence probably helped vindicate his prediction for the 20th century, although he didn’t see much of that. In the meantime, there was a more personal, if perhaps dubious, tribute paid to his book, from an Italian anarchist named Michele Angiolillo.

Born in 1871, just after suppression of the Paris Commune (which had strongly influenced Zola and would later be credited as an inspiration for the Russian Revolution), Angiolillo led a short but radical life, the last major act of which was to assassinate the Spanish prime minister in 1897, in protest against repression.

He then gave himself up and was soon afterwards executed, by garotte. But according to witnesses, he went to his death calmly. And his last message, uttered in a clear voice from the scaffold, was the single word “Germinal”.