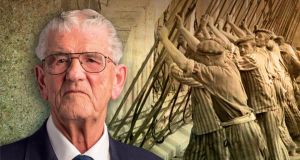 In May 1945, this newspaper broke news about the ordeal of “thirty-two citizens of éire” who had just spent the last years of the war as slave labourers in Nazi Germany.

Five had died there, of disease and starvation. The 27 who survived carried horrific memories, including one of a Belgian fellow prisoner “beaten to death with rubber hose for attempting to escape”, and another of a wounded Pole who was first tortured and then neglected until gangrene set in and he finally had to be shot as a mercy.

More than seven decades later, only one of those 32 Irishmen is still alive. His name is Harry Callan, his age 93. But only now, thanks to his daughter-in-law Michèle Callan, has the tale of his wartime experience been finally told in a book, The Harry Callan Story – Forgotten Hero of Bunker Valentin.

Callan was indeed a citizen of “éire”, as the 1945 report said, although not without complications. He was born in Derry in 1923, months after the end of the Civil War that had failed to remove the new Border. So he was entitled to two passports. But like most of his fellow seamen in the 1930s, he had none, a fact that may have complicated their fate in Germany.

Gathered from the lifeboats, he and his fellow mariners would spend the rest of the war in prison camps

Harry had left school at 14 and worked briefly in a grocer’s shop before joining the British merchant navy, with dangerous timing, in the autumn of 1939.

Despite the war, however, he had a relatively uneventful first year. Then in 1941, after an Atlantic crossing from Montevideo, his ship was sunk off Africa by a German raider. Gathered from the lifeboats, he and his fellow mariners would spend the rest of the war in prison camps.

When the Irish among them were isolated, and deemed neutral, they were first made polite offers of work in labour-depleted Germany.

Declining that, they were then tempted with a resumption of marine service, on trips “in and out of Sweden [with] as many girls as you like”. This too they refused.

The politeness stopped there. In early 1943, they were moved to Bremen-Farge Labour Education Camp where, along with German criminals and political dissidents, as well as French, Russian, and Polish prisoners of war, they began a life of forced drudgery.

The Irish avoided the worst mistreatment, reserved for Germany’s enemies

The vast structure they found themselves working on, Bunker Valentin, covered an area equivalent to four soccer pitches, with foundations 30 metres deep. It was to be a submarine factory, capable of turning out a new sub every two days. And with 10,000 prisoners working around the clock, it was almost operational by early 1945, when the Nazis ran out of road.

In the meantime, the workforce suffered horrendously. The Irish avoided the worst mistreatment, reserved for Germany’s enemies. But brutally hard shifts on little food, in terrible conditions, took a heavy toll. Several died in a typhus outbreak.

Survivors witnessed things they would never forget. Once, digging a dyke, Callan saw a fellow inmate falter from weakness. The foreman took a spade from another worker and hit the stricken man on the head. He slumped to the ground, never to move again, and was just covered with soil while digging continued.

Even amidst such horrors, however, Callan was lucky. In 1944, weighing half the 12 stone he had started with, he attracted the sympathy of the camp doctor, Walter Heidbreder.

This and other kindnesses by German civilians helped Callan survive the war and return to Ireland, eventually, to wrestle with his nightmares

A decent man, exonerated at the postwar trials, Heidbreder managed to get his patient day release to work in a garden.

This and other kindnesses by German civilians helped Callan survive the war and return to Ireland, eventually, to wrestle with his nightmares. He married in 1950 and moved to Dublin, where he still lives.

And having returned to sea in a peaceful world, he spent the last years of his career with B&I ferries, before retiring in 1987.

He has been back to Germany too, several times. First it was to revisit living acquaintances and the graves of dead comrades.  More recently, he has shared his experiences with a new generation of Germans, including students of a school near where the bunker still stands.

Since 2005, the school has commemorated those who suffered there via an annual athletics event. This is an unusual tribute, but apt in one sense. Among the first German words Harry ever learned, hearing it constantly, was “schnell!” (“quick!”), the speed he was always expected to move. Now, he and his fellow bunker builders are honoured by a 5km race every April.

1 How one couple’s weekend away resulted in 30 Covid-19 cases
2 The Comey Rule review: You actually begin to root for Trump
3 Miriam Lord: Government’s latest comedy of errors offers little to laugh about
4 Taoiseach tells TD to ‘cop on’ over criticism of contact tracers asking about pubs
5 H is for hero: the origin story of Jack Reacher, a billion-dollar brand
Real news has value SUBSCRIBE