In an EU of 27, France and Germany have less room for manoeuvre than they once enjoyed 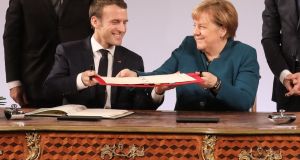 It’s a ritual so faithfully enacted and re-enacted that it must be mandated in some obscure corner of EU law.

Every so often, French and German leaders come together and, over the heads of every other EU government, declare they have struck a common policy position on some contentious issue or other, or that they have plotted the next big integrationist leap.

This annoys almost everyone else. Big – and medium-sized countries feel excluded. Small countries fret about the major powers asserting themselves. Federalists bemoan a lack of ambition and Eurosceptics denounce intolerable expansionism.

But most states have learned to live with these periodic revs of the Franco-German engine, because history shows that while not every big idea from France and Germany comes off, no big policy initiative will go anywhere without their assent.

We come from two very different worlds,” Merkel admitted alongside Macron in Aachen on Tuesday

Nonetheless, it was that fear of exclusion that appeared to preoccupy European Council president Donald Tusk when he spoke this week at the signing of the Aachen treaty – a 16-page Franco-German agreement that commits to deeper bilateral co-operation in areas such as foreign policy, defence, trade and research.

“Let me put it bluntly: today Europe needs a clear signal from Paris and Berlin that enhanced co-operation in small formats is not an alternative to the co-operation of Europe as a whole,” Tusk said.

He needn’t have worried. The pomp attached to the formal signing ceremony in the border town of Aachen this week – on the 56th anniversary of the Élysée treaty, the accord that symbolically brought the two countries together after the war – belied the modesty of the document itself.

At first glance, some of the pledges sound far-reaching. The treaty contains a bilateral mutual defence clause and makes provision for greater military co-operation than ever before. The two countries also commit to a common approach on arms exports.

But rub away the rhetoric and you’re not left with much. The text includes pledges everyone knows will come to nothing – France promises to support Germany’s efforts to secure a permanent seat on the UN security council, for example. The mutual defence clause is a largely decorative flourish given that both countries are already bound by article 5 of the North Atlantic treaty.

While Brexit could strengthen the Franco-German axis in the long-run, the big two now have to contend with a much more complex set of EU relationships

If Paris and Berlin are serious about a common stance on arms exports, there’s a gaping chasm to bridge; only a few months ago, France opted against following Germany’s lead in halting arms sales to Saudi Arabia in response to the killing of the Saudi dissident Jamal Khashoggi in Riyadh’s consulate in Istanbul. And then there’s the most striking absence: fiscal convergence.

The text aspires to a “Franco-German economic zone” with common regulations, laws and taxes on both sides of the Rhine, but all it pledges for now is the establishment of a joint council of experts to work on the idea.

All of this is a long way from a European army or jointly-issued bonds. It’s also a long way from the sweeping ambition of Macron’s Sorbonne speech in September 2017, when the recently-installed French president set out a broad agenda for deeper euro-zone integration and a raft of new initiatives, from new EU-wide taxes on carbon and the digital economy to true European universities.

Whether fairly or not, Aachen will be seen as the outcome of the process that began at the Sorbonne in 2017. And the paucity of ambition in the new treaty is a reflection of how the world has changed since then, not least for Merkel and Macron themselves.

Merkel is now in the twilight of her career, having announced that she would not seek another term as chancellor, and her authority will ebb the closer she gets to the exit door.

Macron has not only lost the political capital that a newly-elected president enjoys; his troubles with the gilets jaunes have weakened him and required him to devote more time to domestic policy (the Aachen event was his first foreign trip in more than a month).

While Brexit could strengthen the Franco-German axis in the long-run, the big two now have to contend with a much more complex set of EU relationships than Adenauer and de Gaulle did when they signed the Élysée treaty in 1963.

Other groups, such as the Visegrad four, the Dutch-led Hanseatic League or the incipient alliance of right-wing populists, are a reminder that, in an EU of 27, France and Germany have less room for manoeuvre than they once enjoyed.

And yet, for all that, the renewal of vows that the Aachen treaty represents, when viewed in a wider perspective, is a useful symbolic reminder of how far the relationship has come.

In the year that Europe will mark the centenary of the Treaty of Versailles, the biggest sources of Franco-German tension are budget deficits and tax policy. We’ll take that.