Udder memories of the Theatre Royal 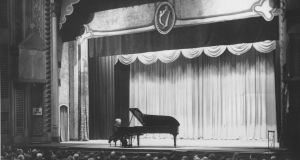 Arthur Rubinstein at the Theatre Royal

Sir, – Although I had on occasion climbed that grand marble staircase in the old Brown Thomas on Grafton Street, I never realised that its provenance was the Theatre Royal on Hawkins Street, as recalled in Gemma Tipton’s piece (“Did you know there was an unused theatre under Busáras?”, November 15th).

Another piece of the Theatre Royal, a window frame, remains in very good use in an old cow byre at my father’s farmyard in Dunsany, Co Meath.

He was converting an old horse stable into a milking parlour in the 1970s when the theatre was being demolished, and a local man working on the demolition supplied him with some materials from the famous structure. So for years, our Friesian cows peered out the Theatre Royal window into our yard, as later did young calves when the shed became a calf-rearing shed.

Today, having been slightly damaged by a camogie-mad sister wielding a hurl and sliotar, the window is mainly used by the swallows when they arrive for their summer sojourn. – Yours, etc,