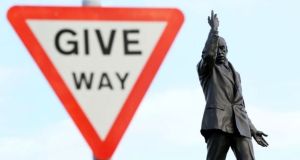 Sir, – With talks now stalled on the restoration of the Northern Executive, the two governments as guarantors of the Belfast Agreement have an obligation to instigate a long overdue review of the institutional arrangements in the agreement. The carve-up agreed between DUP and Sinn Féin at St Andrews in 2006 has evidently failed as talks descend into cultural war. The current inquiry into the Renewable Heat Incentive scheme is highlighting the systemic failings of the structures and workings of the institutions.

While many in the pro-union community population may prefer the return of formal direct rule, this would be contrary to the declared will of the people at the referendum of 1998.

Without a full review of arrangements, and the British government’s reluctance to implement direct rule, it appears that Sinn Féin is holding a double veto over progress.

It was always the intention to review the Belfast Agreement, thus allowing a maturing of the institutions towards voluntary coalition with sufficient checks and balances to accommodate the ongoing divisions in the community. This would enable more democratic, responsible and accountable government.

With economic challenges ahead from Brexit, Northern Ireland desperately needs a functioning government. Smaller parties need to step up to the plate and offer an alternative prioritising the important issues of public services and Northern Ireland’s lagging economy.

For too long the two governments have ignored the implementation of the principles of the Belfast Agreement, and in particular the provisions and aspiration to create a shared society. Time is running out in which to recalibrate the process. – Yours, etc,