Conor McGregor as a role model? 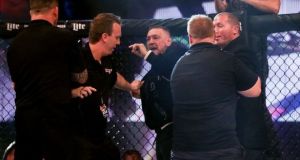 Conor McGregor was involved in an altercation with officials in the octagon at the Bellator 187 event at the 3Arena. He later apologised. Photograph: Gary Carr/Inpho

Sir, – Like many others involved in the education of male teenagers, I have observed the meteoric rise of Conor McGregor and the growing popularity of MMA with a mixture of admiration and utter bewilderment.

While we are compelled to respect the discipline that clearly goes with the training that is necessary to reach such a high level of achievement in his chosen sport, and the single-mindedness with which McGregor has set about conquering the world, we cannot but feel a certain level of embarrassment and even disgust at his recent antics.

Now that he has achieved the distinction of becoming the most famous Irishman on the planet, might it not be wise that McGregor take his lead from the likes of Ronnie Delaney, Paul McGrath, Paul O’Connell or Henry Shefflin?

These men continue to enjoy the regard and affection of the Irish people long after their retirements from sport as much for their innate decency as human beings as for their sporting prowess.

Denigration of others, disrespect for those whose job it is to ensure the safety of defeated opponents and outrageous verbal posturings will never trump respect, integrity and humility.

Over many years, our second-level schools have worked hard through a range of curricular and extra-curricular programmes to promote a view of masculinity that isn’t linked to violence, mindless aggression, sexism and homophobia. Our sporting programmes (and I would include boxing and martial arts along with more “mainstream” team sports in this) with their emphasis on discipline, fair play and respect for opponents and officials have been a valuable part of these endeavours.

Yes, we all know that McGregor’s misbehaviour is a well-rehearsed part of the childish pantomime that is the MMA phenomenon but, to put it in the language of that particular arena, “Come on, Conor, is that really all you’ve got?” – Yours, etc,

2 Laura Whitmore: ‘I’ve had enough of being trivialised and gossiped about’

3 Fintan O’Toole: The Covid-19 pandemic should be the last hurrah for Irish stoicism