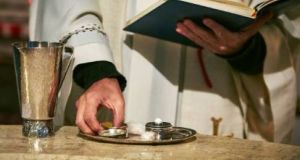 “How had the Irish Catholic Church gone from being such a powerful political institution in the late 1960s, with 34,000 priests, nuns and brothers, supported by an income of €1 billion per annum, to almost total collapse 40 years later, and having presided over the systemic abuse of thousands of children and its cover-up?” File photograph: Getty

On return to Ireland I was appointed by the Government Agency for Personal Service Overseas to provide training for Irish overseas development workers and missionaries (eventually 10,000 of them).

This involved improving their skills in accountability and evaluation, to enable them explain their use of finances provided by the Government and other donors.

Many years later, I was deeply disturbed by the various inquiry reports into clerical child abuse in the Irish Catholic Church. I found it difficult to reconcile my experience of the many fine priests, sisters and brothers with whom I had once worked and trained, with the shocking stories from these inquiries and of the cover-up by church leaders, aided by their Roman overseers.

My reading of these inquiry reports coincided with retirement. Over the next nine years I wrestled with the question, resulting in my book: Betrayal by Silence, the Collapse of the Irish Catholic Church – has it a Future?

In it, I return to the church’s beginning. I trace its emergence from the catacombs. Following Constantine’s 313 AD Edict of Milan, the church expanded from being a movement to becoming, over the next 2,000 years, the powerful institution that we experienced in 20th-century Ireland.

The more I read, the more my once-benign insider’s view of the church became that of an increasingly critical outsider.

How had the Irish Catholic Church gone from being such a powerful political institution in the late 1960s, with 34,000 priests, nuns and brothers, supported by an income of €1 billion per annum, to almost total collapse 40 years later, and having presided over the systemic abuse of thousands of children and its cover-up?

Part of the church’s power lay in its ability to influence the political sphere and social policies. But often understated were the various Pavlovian conditionings to which it subjected religious and lay people.

For instance, by the time the average seminarian had attended five years of junior seminary and seven years of senior seminary, he had been conditioned by 60,000 bells to attend his daily duties. Such conditioning made the Act of Faith redundant, serving to create Ireland’s unique brand of compliant Catholicism.

The church’s power allowed its leaders to avoid public accountability. Every five years, the world’s bishops journey to Rome to secretly report on the state of their own dioceses. Did these secret reports contain or deliberately omit, evidence of the shocking abuse and cover-up of crimes?

Does the church plan on making public these five-yearly ad limina reports to Rome? No, the church is still not practising public accountability.

The avoidance of public accountability by its leaders has brought enormous problems for the church: it corrupted bishops and caused widespread incompetence in communications and management.

If its leaders had practised public accountability, the abuses would long since have been exposed and the church’s collapse would have been avoided.

That collapse was not solely the fault of bishops and religious. The laity, including government, failed too. Just as the State sought an accounting through its inquiries, the laity have an obligation to require of church leaders a public accounting for the resources they contribute to their church.

If the leaders refuse, the advice to “follow the money” as the best way of forcing the truth into the open, also applies to the church. The laity must stop paying them until they do so. When the leaders make their reports public, a second Reformation of the church can begin.

Dr Tony O’Dwyer’s is author of Betrayal by Silence