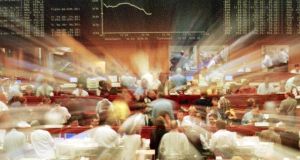 The sacred markets themselves are driven by sentiment and senior financial services people inhabit their own little world. Photograph: Michael Dalder

Last Sunday, when Minister for Health Simon Harris expressed his sadness at the death of Emma Mhic Mhathúna, it triggered a stream of responses on social media that was so malicious, venomous and ranting that others wondered why anyone would choose to be a politician.

Look for an explanation and the shrugged reply is that trust has died and people are angry.

It might not explain the barbarism, but trust has certainly died and people are definitely angry. If truth had a burial date, it was 10 years ago, when the “credit crisis” was ratcheting up and RTÉ’s Liveline listeners began to panic about their bank deposits. Joe Duffy made no attempt to soft-pedal it. His callers wouldn’t believe banks even if they put their hands on a Bible, he declared: “Look at Lehman Brothers, look at Enron, Rusnak and AIB – the issue is trust. I know I sound like Jimmy Stewart in It’s A Wonderful Life . . . ’’

More sophisticated types scoffed while simultaneously investigating up to the limit in government-insured deposits at the post office. The Irish Times radio review was headlined, “A medium for the hysterical”. Brian Lenihan, then minister for finance, lodged a complaint about Duffy with RTÉ’s director general.

As it turned out, the Liveline reaction was perfectly rational. So, in a different sense, was Brian Lenihan’s. But what if Duffy had advised his callers to calm down, do nothing, trust their elders and betters?

On the 10th anniversary of the crash, John Authers, a senior Financial Times journalist of 30 years standing, answered that question, albeit unwittingly. He began his look-back column with a personal anecdote in the context of rising panic among investors to pull their money out of anything remotely risky. It was obviously an old-fashioned bank run – just one that was only visible to those who understood the arcana of treasury bill yields, ie insiders and people like himself.

A self-fulfilling loss of confidence can force a bank out of business, even if it is perfectly well-run

Anxious about a large deposit in his own bank account, he walked to his Citibank branch in midtown Manhattan to find long queues, all well-dressed Wall Streeters, doing exactly the same; hurriedly negotiating a safe place for their money.

A helpful official opened accounts for each of the FT man’s children in trust and a joint account with his wife, instantly quadrupling his deposit insurance coverage, meaning his money (the proceeds of the sale of his London flat) was now government-guaranteed. That day, under its red “banking crisis” banner, the FT’s headline read “Panic grips credit markets”.

Authers led the coverage with a piece describing a breakdown in trust between banks and described the atmosphere as “panic” – but did not mention what he had seen in the bank branch.

He is clear on why he did it: “A self-fulfilling loss of confidence can force a bank out of business, even if it is perfectly well-run. In a febrile environment, I thought an image of a Manhattan bank run would be alarmist.”

What is intriguing is that when he finally wrote the story 10 years on, he failed to anticipate the ferocious intensity of the backlash.

One emailer wrote : “. . . I realised that it actually makes me want to vomit, as I realise what a divide there is between you and I, between the people of the establishment like yourself, and the ordinary schmucks like myself. The current system is literally sickening and was saved for those who have something to protect, at the expense of those who they are exploiting.”

Trust died with the credit crisis and the misery that ensued, he wrote in a lengthy piece about the column’s aftermath. It died in finance and in the media. The fallout is evident in the politicisation of the markets and the willingness to doubt empirical facts. But would he do the same again? The answer, it seems, is that it wouldn’t arise.

If that scene in the Citi branch were to happen today, someone would put a photo of it on Facebook and Twitter, he says. “It might or might not go viral. But it would be out there, without context or explanation. The journalistic duty I felt to be responsible and not foment panic is now at an end. This is dangerous.”

We live in a bubble in financial services . . . We get paid more than most industries do. Do we deserve it? Not in my view

Responsible or patriarchal? What was also dangerous was that those panicky Liveline callers understood that something catastrophic was afoot involving bankers and politicians and that people were being kept in the dark; that the sacred markets themselves are driven by sentiment and that senior financial services people inhabit their own little world.

The man who was head of regulation at the London Stock Exchange in 2008, Nick Bayley, said recently: “We live in a bubble in financial services . . . We get paid more than most industries do. Do we deserve it? Not in my view. Are people much cleverer than in other industries? No, not in my view. Most of us are just relatively high-achieving doers.”

Ten years on, that’s worth remembering, along with the tracker scandals, the nauseating tapes, the vulture funds and the continuing outrageous interest rates differential between Irish borrowers and their EU peers.

It’s about trust, yes. It’s about culture, behaviour and accountability. But like almost everything that makes life bearable, it’s also about common decency.