Kathy Sheridan: If you are not bone-tired by now you should be 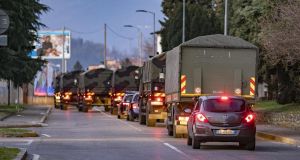 Trucks transport bodies of Covid-19 dead in Bergamo, in spring 2020: Among many images that have haunted us since.

In recent weeks, various friends of different ages and circumstances have sudden lows. There was no particular reason for the sudden deflation. Just bone-tired of it, said one.

A year has passed in a blur of fight-or-flight impulses. A year that began with the luxury of a row about centenary commemorations followed by ground-breaking elections morphed overnight into an unnatural stand-off where fearful people vanished into their homes well ahead of government advice.

Images from Italy of distraught doctors forced to choose who would live or die primed us for the cycles that have dogged us since; crazy bursts of adrenaline-fuelled energy and sunlit novelty to begin with, chased by fatigue, unpredictability, complacency, hypervigilance, anger, resentment and intermittent periods of a wary peace. That pounding noise in our heads was the insistent agitating by lobbyists, the tooth-grinding “why us and not them?” platoons, the incessant search for loopholes in a vicious cycle of self-sabotage. And beyond that was the queasy sense of a fragmenting world, of the World Health Organisation imploring Donald Trump not to politicise the virus – “If you want to have more body bags, then do it . . .” (boy, did he do it) and Boris Johnson’s early enthusiastic endorsement of hand-shaking “continuously” amid No 10 discussions about “herd immunity”. Part of the soul-killing exhaustion of 2020 was to see the idea of the markets taking precedence over human life being played out before our eyes.

What is the monetary value of a human life? It came in the research note published in April by Dr Bryce Wilkinson in the New Zealand Initiative – a pro-free market think tank – with the pedestrian title of Quantifying the Wellbeing Costs of Covid-19. He described his efforts as “more an exploration of trade-offs . . . a contribution to public debate, nothing more”. Evaluating this trade-off is essential, he believes, for good policy advice and decision-making, such as lockdown decisions and border closures.

A few weeks ago, a retired British supreme court justice said  he did not accept that 'all lives are of equal value'

Working off a 2017 New Zealand ministry of health model which had projected 33,600 deaths if a 1918-style pandemic was allowed to run amok, Wilkinson plugged Covid-19 and gross domestic product figures into the framework.

To save that many lives, he concluded, the government could justify spending up to 6.1 per cent of GDP on the fight. To save 12,600 lives (the number projected if the pandemic was speedily controlled), would justify 3.7 per cent of GDP.

But what if the government decided to splash out? “To spend more begs the question of whether more lives could be saved over time if the money went instead to make safer roads and buildings, or perhaps spent on other health services.”

New Zealand went its own way as we know, recording 26 deaths in total up to Tuesday. When it eased out of lockdown in the third quarter of 2020, GDP soared by 14 per cent after an 11.3 per cent plunge in the second.

Nonetheless, Wilkinson’s defenders suggest he was merely doing publicly what governments and insurance companies do quietly every day. We literally put a price on life when drugs are assessed on the extra years they buy a patient, adjusted for cost.

But how do we judge the value of extra months or a year? The current problem lies in separating such exercises from the politics and ideology raging around them. Wilkinson’s argument that the cost of perfect safety is neither affordable nor desirable – nor, he failed to add, achievable – was setting up a straw man. “Everyone trades risk for pleasure when crossing the road, swimming in shark-filled water or when consuming dangerous substances. People do not seek risk-free lives because safety is not absolute.” Nonetheless, he looks for consistency in safety costs. “It is senseless to spend $1 million to reduce annual deaths by one person if society could save two lives a year by spending that $1 million on something else . . .”

We’ve heard many versions of this in the past year. The missing link in the Covid-19 context is personal agency. Consume dangerous substances and you only risk your own life. Abandon caution in a deadly pandemic and you are risking the lives of others.

A few weeks ago, a retired British supreme court justice and well-known lockdown sceptic, Jonathan Sumption, raised hairs by telling the BBC show, The Big Question, that he did not accept that “all lives are of equal value”. When Deborah James, a woman with stage-four cancer, responded, “I’m the person who you say their life is not valuable”, he interrupted to say, “I didn’t say it was not valuable, I said it was less valuable.” He later said it was a misunderstanding.

Either way, it was unconvincing. Seven years ago, as a supreme court judge addressing the tragic Tony Nicklinson case in a decision which upheld a ban on doctors helping patients to end their lives, he called the sanctity of life a “fundamental moral value”.

“A reverence for human life for its own sake is probably the most fundamental of all human social values . . . In a case like this we should not try to analyse the rationality of such feelings. What matters is that, in one form or another, they form part of almost everyone’s intuitive values.” Only Lord Sumption knows how his anti-lockdown views have influenced him in the meantime.

What it tells us is that the past year has been about much more than fighting a pandemic.

If people are bone-tired, it’s no wonder.