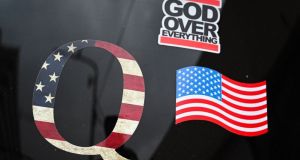 QAnon conspiracy theorists believe a secret cabal is kidnapping children and subjecting them to various forms of abuse. Behind this, some of them believe, is the Rothschild Jewish banking dynasty.

Conspiracy theories are more popular and more widespread in the 21st century than they have ever been. They are powered by the rise of the internet and social media, enabled by the declining influence of traditional gatekeepers of opinion such as newspaper editors, TV executives and book publishers, and encouraged by the spread of the uncertainty about truth and falsehood encapsulated in the perverse concept of “alternative facts” popularised by, among others, former US president Donald Trump and his spokespeople.

Over the centuries conspiracy theories have pointed the finger at many different groups, from the Jesuits to the Freemasons, but it is above all Jews who have been the object of the paranoia they represent.

A minority religious community in an overwhelmingly Christian Europe, the Jews were blamed in the Middle Ages and after for a whole range of seemingly inexplicable events, most notably perhaps the Black Death, the pandemic of bubonic plague that killed half Europe’s population in 1348-1349, and the French Revolution which overthrew the traditional European order in the years after 1789. Massacres and pogroms were the result.

It was in Russia under Tsar Nicholas II that the most notorious of anti-Semitic tracts originated. Known as The Protocols of the Elders of Zion, it purported to be the minutes of a secret meeting of Jewish “wise men” held in 1897 to plot the overthrow of civilization. It’s been described by many historians as a document of immense power, a “warrant for genocide”, inspiring Hitler to carry out the extermination of six million Jews in what he called “the final solution of the Jewish problem in Europe”. It’s been translated into many languages, reprinted many times, and it’s sold millions of copies.

And yet, it’s a very strange document, a confused jumble of ideas that contains none of the traditional features of religious anti-Semitism, such as the fantastical and absurd “blood libel”, involving allegations of the murder of Christian boys by Jews for supposed ritual purposes.

Nor did the Protocols exhibit any of the features of the new, racist anti-Semitism that was just surfacing at the time. They showed an imaginary global community of Jews, bound together by religion, plotting to destroy the old European order through liberalism and socialism, Freemasonry and big industry, financial speculation and the arms race (a sign of the document’s composition not long before the first World War).

By the time the document, originally composed in Russian, was translated and popularised after 1918, it was already out of date. And in 1920 it was revealed by the London Times to be a concoction of paragraphs lifted from a mid-19th-century French satire and a German Gothic novel, with elements added by its Russian compiler. It was not a genuine set of minutes of Jewish conspirators at all. The fact that it was a falsification was confirmed in a major trial held in Berne, Switzerland, in 1934-1935.

And yet, this did little to discredit it in the eyes of anti-Semites. The contents of the document were less important than its claim to provide authentic evidence of the Jewish world conspiracy emanating from the Jewish community itself. For Hitler, writing in his autobiographical tract, Mein Kampf, the Protocols exposed “consciously” “what many Jews do unconsciously”.

As Nazi propaganda minister Joseph Goebbels wrote in his diary in 1943: “One can’t speak of a conspiracy of the Jewish race in any straightforward meaning of the term; this conspiracy is more a characteristic of the race than a case of intellectual intentions. The Jews will always act as their Jewish instinct tells them.” It didn’t matter, he went on, whether the Protocols were genuine or not, because they exposed a deeper truth about the Jewish racial character.

The Protocols did not invent the idea of a Jewish world conspiracy – it was around long before they were concocted; all they did was supposedly confirm it. And the idea has survived in various forms to the present day. It can be seen for example in the self-styled QAnon conspiracy theorists, who believe that a secret cabal of leading Democrats, liberals and Hollywood actors is kidnapping children and subjecting them to various forms of abuse, including the extraction of adrenaline from their bodies – an obvious rehash of the medieval “blood libel”.

Anti-Semitism emerged at a violent rally in Charlottesville, Virginia, in 2017, as part of the “Great Replacement Theory”

Behind this, some of them believe, is the Rothschild Jewish banking dynasty, aided and abetted by the Hungarian-American international financier George Soros, also Jewish. Such beliefs have real consequences: QAnon followers were prominent for example in the mob that stormed the Capitol building in Washington DC on January 6th. Anti-Semitism emerged at a violent “Unite the Right” rally in Charlottesville, Virginia, in 2017, as part of the “Great Replacement Theory”, a belief according to which the white race in America is being driven out by racial minorities: the demonstrators also chanted “Jews will not replace us!”

Anti-Semitism is a key component in anti-vaccine groups. A study of 27 of them found anti-Semitic conspiracy theories in 79 per cent, from paranoid fantasies of a Jewish plot to destroy the economy by spreading the virus, to using the vaccine to destroy the fertility of the “white race”.

None of this is harmless. Quite apart from encouraging people who believe in such ideas not to be vaccinated, making them a danger to others as well as to themselves, it also stokes racial prejudice against Jews, leading to many kinds of discrimination, hate speech and acts of violence.

Social media companies are beginning to confront the spread of the hatred and misinformation. But there is a long way to go. Free speech necessarily has its limits: currently, however, we seem uncertain about where those limits lie. We need to decide before it is too late.

Richard J Evans is regius professor emeritus of history at the University of Cambridge. He is giving the Holocaust Education Trust Ireland 2021 Annual Holocaust Memorial Lecture on Tuesday evening at 6pm.