Church is running out of reasons not to ordain women 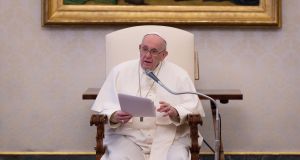 In 2016 Pope Francis established a commission to examine whether women could or should be ordained deacons. Stating that the outcome was inconclusive, he established another commission in 2020. Handout photograph: Vatican Media/EPA

Pope Francis recently announced that he would remove the phrase “lay men” from Canon 230 and replace it with “lay persons”. This change to the church’s legal code means that women can now be permanently installed as lectors or acolytes – essentially, readers, distributors of Communion and assistants at Mass and the sacraments.

Although not a radical change – women have been carrying out these duties for decades – the decision was welcomed by the international Women’s Ordination Conference.

It is seen by some as progress. However, it remains the case that married and single men can be ordained deacons in the Catholic Church. Women cannot.

To date, calls for restoration of the diaconate to women have fallen on deaf ears in Rome

At least four such studies have taken place since the 1970s. None have recommended against women deacons.

To date, calls for restoration of the diaconate to women have fallen on deaf ears in Rome. Calls for reform of ministry and the reinstatement of women deacons and ordination of women to the priesthood come from many parts of the Catholic world.

The Synod of Bishops for the Pan-Amazon region in 2019 begged the pope to permit women deacons and married priests; it is not on its own. The newly consecrated Archbishop of Dublin Dermot Farrell, in an Irish Times interview on January 2nd, also stated that he would like to see women deacons, as did the Association of Catholic Priests of Ireland in 2014.

In Germany, two bishops are on the record recently as calling for change in the church’s attitude to the ministry of women. Leading this group is Bishop Georg Bätzing of Limburg, elected president of the German bishops’ conference in 2020.

He went further, stating that it is increasingly difficult to justify the ban on ordaining women. Bishop Gebhard Fürst of Rottenburg-Stuttgart said in 2017 that women deaconesses are a “sign of the times”.

Restoration of women’s diaconate should not be seen as a solution to the declining numbers of men joining the priesthood, but rather as a means of accommodating the diversity of gifts, talents and decision-making that women would bring to ministry and leadership, thereby enriching the whole community.

There is clear, incontrovertible evidence from the Gospels and epigraphic discoveries that women were essential in the spread of Christianity

Phyllis Zagano, in her book Holy Saturday, cites numerous references to the ministry of women in the early church. Prof John O’Brien, in his recent book Women’s Ordination in the Catholic Church, argues convincingly that “ the early church’s developing theology of ministry focused not on the power conferred, but on the ecclesiastical relationship into which the ordained was conferred... Eucharistic presidency followed from pastoral leadership over a community.”

There is clear, incontrovertible evidence from the Gospels and epigraphic discoveries that women were essential in the spread of Christianity, as demonstrated in the resurrection and Pauline narratives.

A narrow anthropology of women based on child-bearing has persisted in church thinking. De-linking women from this one-dimensional understanding of what it means to be female is an urgent necessity if women in the Catholic Church are to be treated as disciples of equality.

The constant mantra that only a male can image Christ suggests that gender is more relevant than humanity.

Complementarity of the sexes has been put forward as a justification for excluding women from ministry. This notion is anchored in papal writings in modern times, appearing frequently in the writings of Pius XII and more recently those of John Paul II.

Theologian Mary Hunt puts it very well when she says: “The growing biology and social scientific consensus in favour of the broad range of ways in which human beings live out their gender identity undermines the fragile and indefensible sexist and heterosexist anthropology on which the Catholic teaching on human sexuality is based.”

The institutional church is flying on one wing and breathing with one lung by refusing to value the diversity that women would bring to ministry. It will not be sufficient to appoint “safe” women to positions: diversity of culture, insight and knowledge are as necessary as the now more frequently stated objective of inclusion.

Women need to be treated on the basis of their humanity and willingness to be called to serve, not their gender. This would be the Christian way to proceed.