Eurovision tells us everything about the state of Europe

Irish hubris, Portuguese charm and British arrogance were all in the contest’s limelight 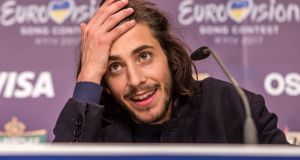 Salvador Sobral’s Eurovision victory on Saturday was marked by modesty and generosity. “Just a boy in his bedroom singing a song written by his sister,” as Graham Norton put it. Photograph: Brendan Hoffman/Getty Images

Those Portuguese, eh... ? At our Saturday night gathering, the television volume was turned up only at the end for maximum snigger at the winning entry. Instead, it caused all chatter to cease and the room to fall into a trance at the simple delivery of a soft love song in Salvador Sobral’s native Portuguese, and at a victory marked by modesty and generosity. “Just a boy in his bedroom singing a song written by his sister,” as Graham Norton put it. The silence was broken only when someone hissed about Dustin the Turkey, citing that Eurovision entry for the ages : “Oh I come from a nation wot knows how to write a song. Oh Europe where oh where did it all go wrong...”

If the Irish national journey into rocket-fuelled hubris began with Riverdance in 1994, it was surely book-ended in 2008 with Irelande Douze Pointe, that massive two fingers to Europe, soon to be followed by a bailout. Those of us with a memory still rage about the smart folk who denied the possibility of a hard landing, then crashed us right through the runway. On reflection, though, we never gave sufficient credit to the creative geniuses who identified peak Irish arrogance and devised that coded warning for Europe by despatching a singing turkey to Belgrade. The seeds of the bankers’ bailout were probably planted that very night in a few well-appointed, German drawingrooms.

Eurovision, for all its lunacy, has a way of crystallising the national mood. Portugal was the second euro-zone state (after Ireland) to exit the bailout, following a €78 billion rescue programme, years of austerity, unemployment that soared to 17.5 per cent, and tragic rates of emigration. Last year, the value of their remittances home topped €284 million.

But Portugal is on the up, gently, unshowily, like its song. Under the centre-left Socialist government – with the support of the Communist party and Left Bloc – the deficit has been slashed to its lowest in 40 years, taxes have been cut, civil servants’ salaries restored, and the welfare system given a makeover. Under headlines invariably featuring the magic words “sun”, “surf” and “low rents”, Lisbon is working towards transforming itself into the next tech capital. Then for its latest trick, the country produces a Eurovision winner that eschews the deranged circus acts and does what the competition was set up to do, viz, “stimulate the output of high-quality songs in the field of popular music”. Quaint, eh? “We live in a world of fast food music,” said Sobral. “This is a victory for music... music isn’t fireworks; music is feeling.”

In a sense, the Eurovision weekend turned into a tale of two countries, Portugal and Britain. Portuguese immigration into Britain soared from 111,000 to 219,000 in the three years to 2015, making them the fifth-biggest foreign community there after Poles, Indians, Irish and Romanians. But in a portent of better times, last year showed a slight fall-off in departures.

Which is just as well, given Britain’s nativist state of mind – or at least the one epitomised by Conservative councillor Nick Harrington, a chap striding towards the sunlit uplands of power following his election for the Stoneleigh and Cubbington ward to Warwick District Council, only to self-sabotage with a near fatal inhalation of Brexit fumes late last Saturday. So toxic was the dose that the more familiar hallucination about “taking back control” morphed into the delusion that Ireland was still a colony. That empire drug can be dangerous and should never be mixed with other substances.

When we awarded nul points to the UK, even Nick’s abnormally high toxins tolerance abandoned him, poor lamb. “... thanks Ireland. You can keep your f**king gypsies! Hard border coming folks”, he tweeted. One can only commend him for staving off the fume effects long enough to remember how to locate the exclamation mark and the asterisks.

Anyway Nick, we’re pretty chilled here in f**king Ireland about your little episode. We rejoice in the knowledge that borders work both ways and in view of the fallout from your overinhalation, you may have learned a valuable lesson about exclusion and marginalisation.

While you have a nice rest, we are taking great delight in Portugal’s charming victory and watching French president Emmanuel Macron receive a rousing welcome in Germany. But be assured that in Britain, it is business as usual for the Tories. They’ve set off a blizzard of attack advertisements against Jeremy Corbyn, in which he says, above ominous music, “No I don’t think too many people have come [to the UK]”, before being abruptly cut off, while by contrast, Theresa May issues her routine diktats about crackdowns on immigration – on people from Europe. People such as the Portuguese, who do no harm and underpin your economy.