Just two weeks to stave off hunger crisis in Mozambique

Without seeds to plant, people will face food shortages right through 2019 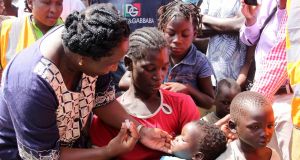 A child receives a cholera vaccine, in Beira, Mozambique. Because the land was already saturated before the arrival of Cyclone Idai, the scale of devastation is staggering. Photograph: Celeste Mac Arthur/EPA

Early last month, as Cyclone Idai was forming over the Indian Ocean, unusually severe rainfall was already causing extreme flooding across Mozambique and Malawi. When the powerful weather system made landfall on March 14th, it hit the port city of Beira in Mozambique first, causing a 14ft storm surge across the city of 500,000 people, effectively creating an “inland ocean”. Ninety per cent of the city was destroyed.

The cyclone went on to wreak immense damage across Mozambique, southern Malawi and eastern Zimbabwe, with almost 1,000 people already confirmed to have died, hundreds of thousands displaced and more than two million in need of humanitarian assistance across the region, the majority in Mozambique.

Because the land was already saturated before the arrival of the cyclone, the scale of devastation is staggering, with the loss of about half a million hectares of crops that were ready to be harvested. In this region where in excess of 75 per cent of people are reliant on agriculture for their livelihoods and often their own survival, the cyclone hit when people were on the last of their food before the next harvest. The decimation of livelihoods and food security has been compounded by the extensive damage to infrastructure.

In Mozambique and Malawi, Concern and other aid agencies have begun responding to immediate needs on the ground, distributing food and emergency survival kits to communities that have been worst hit, installing water and sanitation facilities in many of the temporary camps that have sprung up. There is an urgent need not only to provide people with the basics for survival but also to head off immediate threat of disease that has come with the flooding – more than 1,000 cases of cholera have been confirmed since the outbreak of the disease last week.

Crucially, there is now only a two- to four-week window for the planting of seeds needed to provide a winter harvest. It is therefore vital that we get seeds and tools to farmers so they can replant as soon as the rain-sodden ground will allow. For aid agencies, this will require a massive purchasing and logistics exercise and if we do not deliver in the coming weeks there will be no food to harvest, which will bring a new wave of crisis.

The UN secretary general, Antonio Guterres, has called on international donors to fund the UN appeals quickly and fully so that aid agencies can urgently ramp up their responses. Almost a month after the cyclone and despite extensive media coverage, the international response from larger donors such as the European Union has been slow and insufficient.

At this stage, a far more robust lifesaving response should have been mounted

Although more than $300 million in emergency funding is needed to respond to the urgent needs of more than 3 million people across Mozambique, Malawi and Zimbabwe, only $40 million has been made available to date. At this stage, a far more robust lifesaving response should have been mounted.

As it was in response to previous disasters such as the Nepal earthquake in 2015 and Typhoon Haiyan, which struck the Philippines in 2013, aid agencies are relying heavily on the generosity of the public in order to hit the ground running. But if an increase in large donor funding doesn’t become available, agencies will be forced to scale back the ambition of their response at a time when urgency is of paramount importance. People cannot wait for assistance in the aftermath of a disaster this severe.

Cyclone Idai was yet another brutal reminder of how the dangers of climate change and extreme weather events, especially in vulnerable, at-risk countries where those have contributed the least to causing climate disruption, are becoming the first and worst affected. There is an increasing need to respond to sudden disasters that plunge people from living off their land to absolute devastation.

In the 21st century, we know how to respond to largescale natural disasters and how to do it well. The world responded rapidly to some of the most largescale emergencies such as the 2010 earthquake in Haiti and the 2003 tsunami. But timing is everything. When a country declares a national emergency and calls for international assistance, we must ensure that humanitarian response capacity is adequately resourced so that people’s urgent needs can be met rapidly and comprehensively.

In Mozambique and Malawi, the coming days and weeks will be critical. Without clean water, food and shelter, the death toll will rise. Without seeds to plant, people will face food shortages right through 2019. Without a serious injection of funding quickly, the international community will have failed countless people whose lives have been ripped apart by sudden disaster.

A rapid response has to be just that – rapid and at scale.