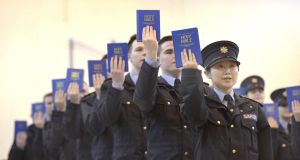 Garda reservists being sworn in in Templemore in 2013. Reserve policing is commonplace in Europe, across the Atlantic and in the United Kingdom. File photograph: Brenda Fitzsimons

It is remarkable, as it is regrettable, that the members of the Oireachtas Committee on Justice and Equality could not find a reason even to acknowledge the existence of the Garda Reserve in its report last week on how the community can tackle rural crime.

The report, signed off under the chairmanship of Sinn Féin’s Caoimhghín Ó Caoláin, added little that is new to the public conversation about the issue. The 96-page document is almost wholly a cut-and-paste job from Garda Inspectorate reports, overlaid with some extracts from last September’s Report of the Commission on the Future of Policing in Ireland, chaired by Kathleen O’Toole. Everything here has been said before. Many times.

Reserve or volunteer support is a commonplace feature of modern policing in Europe, across the Atlantic and in the UK. It has developed latterly as a practical response to the reality that the community’s ever-increasing demands for policing services simply cannot be met by continuing to expand the numbers of paid, full-time personnel.

Most policing activity is passive or of low intensity. It consists of patrolling, observing, guarding or engaging routinely with the public. Only a small proportion involves active engagement with criminals and antisocial elements or, indeed, investigating crime.

Other countries have recognised this and have formalised structures to allocate much of the low-intensity police work to willing members of the community, leaving the full-time, professional police, with their advanced training and equipment, to deal with serious situations that arise.

There is a town I know on the French Mediterranean coast with a population of about 5,000. It has a small complement of Police Municipale with a Gendarmerie Nationale post outside the town. In the summertime, the population swells to more than 100,000, as the camping sites and caravan parks fill with city-dwellers on holiday.

In the evenings the police patrol the seafront promenade in threes or fours. Others patrol the market and the narrow streets, busy with holidaymakers. But these police wear a flash with the word auxiliaire on the shoulder. There may be one or two full-time officers on patrol but the others are all volunteers, men and women who give of their time to help keep their town and their visitors safe and free from threat. They continue to play a role even in the off-season. In the afternoons, when the schools empty their classes into the streets, there will be an auxiliaire on duty in uniform, ensuring the safety of the children and regulating the traffic.

Similarly, there is a small “city” I know in upstate New York. The police department comprises a chief and a handful of sworn officers. But every evening the streets and suburbs are patrolled by “APOs,” auxiliary police officers, paired in marked cars and connected to the communications system at the headquarters office. The APOs are men and women, living in the city, doing their jobs and giving of their time to the community.

All of them have been trained and are qualified in auxiliary and support policing.

The Garda Reserve was created under former justice minister Michael McDowell’s 2005 Garda Síochána Act. But it has never fulfilled its potential, being often resented by full-time gardaí and condemned by their representative associations. Some volunteers have seen it as a stepping stone to a Garda career. The O’Toole commission found that it was neither trained nor managed properly, and that its role was poorly defined. The commission recommended that there should be no further recruitment until a full review of the reserve’s operations and functions could be completed. Its strength is down to about 500 now, with no reservists at all in many districts.

Perhaps predictably, the Oireachtas committee report condemns the closure of rural Garda stations, notwithstanding the fact that Ireland has more than twice as many as Scotland and three times as many as Denmark, both with similar populations.

Garda stations of themselves are only of symbolic value. International research shows that the proximity of a police station has no effect on crime incidence. But the potential of a properly developed, trained and resourced Garda Reserve in combating rural crime could scarcely be overstated.

Roaming criminals would be much less likely to strike with impunity if every village and town had its establishment of uniformed, volunteer gardaí, working closely with and under the direction of the regular force. The reservists would have police powers while on duty (as is currently the case) and they would have the intimate local knowledge that full-time gardaí, operating from a district headquarters, perhaps 20km away, could not have. If it works in rural France, rural England and small-town America, it should work here.

Garda Commissioner Drew Harris is reportedly assessing the future role of the reserve, as recommended by O’Toole. He will undoubtedly identify challenges.

It is hard enough to maintain standards and discipline among full-time members. There will be continuing resistance from the Garda associations. And there is arguably something in the Irish psyche that embraces volunteerism in so many spheres, from overseas aid to sport, but seems to reject it in relation to policing. If there can be volunteers in fire engines, ambulances, Coast Guard Ribs. Why not in Garda cars?

If rural Ireland is to be a safer place and if the fear of crime is to be allayed, a properly developed volunteer police reserve is a way to do so.

It would involve taking on vested interests and challenging some entrenched attitudes. But any first step has to be to get beyond the cliched vocabulary that has been built around rural crime and community policing and to be informed about what is being done elsewhere. Regrettably, this report does not even get to that first step.

Conor Brady was a member of the Garda Síochána Ombudsman Commission (Gsoc). He is a former editor of The Irish Times

1 Susie Dent: ‘Jimmy Carr is incredibly rude to me. I took it as a compliment’
2 Trump selects Amy Coney Barrett for Supreme Court
3 Blackrock and Mulhuddart: How Covid-19 affected two Dublin suburbs
4 Man with electric scooter who died in Meath was due to get married in the coming weeks
5 Political focus shifts as Government desperately tries to avoid new lockdown
Real news has value SUBSCRIBE