Jokes are being weaponised in culture wars

Despite risk of bad taste, comedians must honour progress and defy group-think 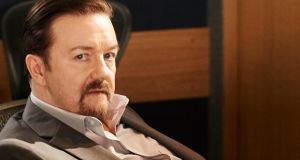 Ricky Gervais: “You can joke about whatever you like. And some people won’t like it and they will tell you they don’t like it . . . It’s a good system.” Photograph: Ray Burmiston/Entertainment One/PA

On the July 7th, 2005, 52 people were killed and over 700 seriously injured when Islamic terrorists detonated a series of bombs in London. One of the bombs had gone off on the top deck of a double-decker bus, ripping off its roof. That same evening in London, the comedian Greg Fleet walked out on stage to perform his act. His opening line was “It’s always the same – you wait ages for a bus to come along and then 2½ come together.”

Following the 9/11 attacks, native New Yorker comedian Joan Rivers felt she had to address what had happened during her first live performance after the tragedy. “I was there in New York the day the Twin Towers came down” she said. “Three thousand people died. That’s three thousand widows. Each of whom got three million dollars [in compensation]. You know what – maybe two or three of those widows weren’t so unhappy.”

Comedy is a rough beast. It’s a transgressive, provocative, censorious tightrope act in which, as one of the greatest comics who ever lived, Bill Hicks, has said “It’s about the moral courage to deal with the important issues of the day without fear of media, corporate, political or quasi-religious censorship or disapproval.”

Three recent stories illustrate Hicks’s timeless tenet. In December, comedians invited to perform at the University of London were asked to sign a “behavioural agreement” form to ensure that the material they performed at the venue “be presented in a way that is respectful and kind so as to ensure an environment where joy and love are reciprocated by all”.

This week, Netflix is under criticism for blocking an episode of a show by the comedian Hasan Minhaj from streaming in Saudi Arabia. In the show, Minhaj mocks the differing responses of Saudi officials to the disappearance and murder of the journalist Jamal Khashoggi. Netflix say they removed the show following a request from Saudi authorities.

On Tuesday, offence and outrage were widespread followed the leaking of audio from a recent stand-up performance by US comic Louis CK. In the clip, he is heard mocking the survivors of last year’s high school shooting in Parkland, Florida (many of the survivors have gone on to advocate for tighter gun control laws) and how gender-neutral people ask to be addressed by pronouns other than “he” or “she”.

The offence and outrage were turbo-charged by the fact that Louis CK is still very much in a state of social purgatory following the revelation in 2017 that he had sexually harassed a number of women in a most sordid manner. The revelations led to him being dropped by media outlets, a film he made was never released and his career was effectively put on hold.

But the context of what he said about the Parkland survivors and gender-neutral people is crucial here. The build-up to the routine was classic shtick: a disgruntled 51-year-old man complaining about “kids these days”. He refers to how when he was a teenager he was out getting drunk and getting high, not caring about anything but the possibility of casual sex.

This he contrasts with certain teenagers today: gender-neutral kids saying they should be addressed by certain pronouns; of the Parkland school survivors, he says “You’re not interesting because you went to a high school where kids got shot. Why does that mean I have to listen to you? You didn’t get shot. You pushed some fat kid in the way and now I have got to listen to you talk.”

But what the reaction to Louis CK’s miserable routine has shown is that humour and comedy are now being weaponised in the culture wars.

For most of his career, Louis CK was sanctified as a liberal icon, someone who was applauded for saying during the 2016 US presidential campaign that “Donald Trump is Adolf Hitler.”

Today’s headlines are not that Louis CK has become, on this evidence, creatively redundant, but rather that he is now an alt-right comedian.

Attempting and failing to mock the Parkland school survivors and then making an unfunny observation about gender-neutral pronouns does not make you a member of the alt-right.

Is there any comedic material to be squeezed out of the Parkland school survivors who have shown themselves to be articulate and informed advocates for gun control? There really doesn’t appear to be any but if someone has something, fire away.

Should gender-fluidity ever be joked about? If deserving of humour, of course so.

Should gender-fluidity ever be joked about? If deserving of humour, of course so

Modern comedy as we now know it was born in Edinburgh in 1960 when Peter Cook, Dudley Moore, Alan Bennett and Jonathan Miller presented their show Beyond the Fringe, a savage satire in a time of cultural deference that led to the later comedic dam-burst of Private Eye, Monty Python et al.

Howard Levin’s now famous review of that show spoke of how for the first time comedy and satire was “merciless, exhilarating, cleansing, right, true and good – this satire is real, barbed, deeply planted and aimed at things and people that need it”.

And that, as with Bill Hicks’s maxim of “without fear or favour”, still holds.

The art here is in deciding “the things and people that need it”.

In rushing to Louis CK’s defence, Ricky Gervais wrote “Stop saying ‘you can’t joke about anything anymore’. You can. You can joke about whatever you like. And some people won’t like it and they will tell you they don’t like it. And then it’s up to you whether you give a f**k or not. And so on. It’s a good system.”

We have emerged from a not-too-distant time when comics would routinely refer to anybody from the Indian subcontinent as a “Paki”, who would affect a lisp and a limp wrist to denote homosexuality and believe that an exaggerated West African accent is hilarious to white people’s ears.

It behoves today’s comedians to honour that progress by challenging orthodoxies and stepping back from consensual group-think. Pomposity needs to be punctured and hypocrisies exposed. Today’s all-too-common sanctimonious pieties – wherever they are to be found on the political spectrum – need to be grist to the comedic mill.

Nobody, if deserving, is above the comedic law. If you don’t believe that, you are advocating for comedy sectarianism.

Following her 9/11 widows joke, Joan Rivers got spat at on the street and was out of work for years. She summed up her plight perfectly – and perhaps the plight of comedy: “They called me an evil, ugly bitch. That’s so untrue – I’m an evil, ugly bitch comedian.”