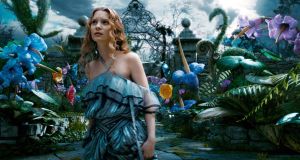 “You must believe impossible things in order to understand why Apple does not believe it must pay tax.” Photograph: Walt Disney Pictures/Courtesy Everett Collection

At the end of a lengthy interview with Reuters this week Apple’s top lawyer made the following remarkable statement about the iPhone maker’s battle with the European Commission over how much tax it pays in Ireland. “The difference between those two creates exactly the kind of loophole that the commission has now been able to exploit,” he said.

Until Monday it was generally assumed that it was companies such as Apple which exploited the legal loopholes created by the differences between two systems to pay as little tax as possible. They shuffle jobs, factories, sales and intellectual property around the globe, playing countries off against each other and reducing their tax bill.

Ireland has pretty much built a whole economy based around this paradigm. Children have been educated, houses bought and beer drunk in the belief that US multinationals were setting up in Ireland to avail of tax loopholes.

However, Apple – always the innovator – sees things differently. In Sewell’s world it is actually Governments that exploit the loopholes to try to make companies such as them pay tax.

The base assumption here seems to be that supra-national companies such as Apple should not be expected to pay tax. In fact, they have to be constantly on the lookout for underhand moves by sovereign governments to try to steal their shareholders’ money to build roads, schools and hospitals.

It is also, in its own way, quite terrifying. It implies that the top lawyer in what is arguably the world’s most successful company has a world view that simply does not buy into the social contract underpinning liberal democracy.

Who knew that when you bought an iPhone you were contributing to the coffers of an organisation that has the power to undermine our way of life in ways that Vladimir Putin only dreams of ?

However, it also speaks volumes about the extent to which this sort of Alice in Wonderland thinking has become entrenched into the mindset of companies such as Apple.

That, in turn, raises questions about the ability of governments that are attempting – under growing pressure from electorates – to do something about it. As their tax bases are eroded and their citizens’ anger increases, they are clinging desperately to the life raft that is the OECD’s Beps agreement. This is an international agreement to try to stop many of the practices that allow big corporations to play countries off against each other.

It is, however, based on the assumption that US corporate tax rates will remain high and that US corporations’ main objective will be to make as much of their taxable profits outside of the US as possible.

Last week he summoned the leaders of some of the US’s largest technology companies, including Tim Cook of Apple, to meet him in New York. It was an awkward moment given Trump’s illiberal position on many issues and the liberal values that many of these companies espouse.

The Apple chief executive explained it thus to his staff in an internal communications platform: “Personally, I’ve never found being on the sideline a successful place to be.”

He then went on to list issues that Apple felt strongly about and wanted to advocate for, according to the TechCrunch news website. “Some of our key areas of focus are on privacy and security education. They’re on advocating for human rights for everyone and expanding the definition of human rights. They’re on the environment and really combating climate change.”

Many of these issues – particularly climate change – cut across Trump’s agenda but Cook does seem to be at one with Trump on tax. How these laudable objectives can be achieved in a world where a big corporation characterises the efforts of governments to collect taxes as exploiting loopholes is at best a little out of touch with reality.

Which brings us nicely back to Alice in Wonderland and the Red Queen’s famous quote about believing six impossible things before breakfast.