So many festivals and gigs have been cancelled, while the future for theatres, music venues, galleries and cinemas is uncertain 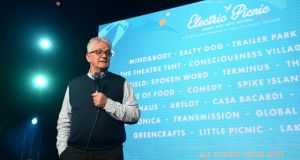 It was only 17 days ago that Festival Republic’s Melvin Benn said that Electric Picnic would go ahead in early September. Photograph: Dara Mac Dónaill / The Irish Times

One of the many unexpected side-effects of the Covid-19 crisis is that I now know far more than I ever wanted or needed to about the inner thoughts of sportspeople on the meaning of life. I’m also over-informed about plans to rejig the sporting calendar in the second half of this year and into 2021. All this is an inevitable byproduct of the existing media architecture; hourly radio slots must still be filled, podcasts have to be recorded and pages require ink.

No great harm to any of this, but it does contrast with the way plans for other major public events – cultural ones in particular – have flown under the radar. Yes, all festivals, gigs and live performances planned until May have been cancelled (some of them, such as Vantastival, hoping to reschedule for the autumn). But what of those in June, July and August? It was only 17 days ago that Festival Republic’s Melvin Benn said that Electric Picnic would go ahead in early September because “I’m 100 per cent of the belief that by June we will all be over the hump and we will all have forgotten about it, quite frankly”.

In retrospect, that looks like a combination of old-school show-must-go-on bravado and the sort of misguided information which was prevalent in the UK at that point (when I asked Electric Picnic at the time where Benn was getting his information, they cited England’s chief medical officer, Chris Whitty).

We’re not in that particular Kansas anymore, but many promoters of summer festivals have remained quiet on their plans. And, at time of writing, most summer events have not officially been cancelled. One exception is the Carlow Arts Festival (June 4th-9th), which announced this week that it won’t be going ahead.

“So much work and planning has already gone into this year’s festival,” the festival said in a sad statement which could be echoed by thousands of others around the country. “We really hope that the situation will have improved hugely by June, however, on Government advice it would be unwise for us to go ahead with the event for the protection of our audience, artists and staff.”

Galway 2020 has also signalled a “significant contraction”in its planned schedule and Dalkey Book Festival announced this week that it would not take place in June as planned but hoped to reschedule for later in the year. That sort of aspiration is unrealistic for the big music festivals, though. Avril Stanley, director of Body & Soul festival (June 19th-21st), said: “While we may not have the answers, nor the ability to see into the future, we are at this juncture preparing for the 11th edition of Body & Soul to take place as planned.”

Among the other big music events coming up before Body & Soul are Forbidden Fruit, in Dublin on May 30th-31st (promoted by Pod), Live at the Marquee in Cork (Aiken Promotions, from late May to late June) and The Killers at Malahide Castle (MCD, June 16th and 17th).

In a statement, MCD urged people to “act responsibly and deal with actual facts to avoid exacerbating the worry and anxiety that is currently overwhelming so many citizens across Ireland at this time”.

Indeed, but even in the most benign scenarios being presented at this stage, it’s hard to see any of these festivals going ahead. Social distancing regulations may have been relaxed somewhat by June, but surely not enough to permit mass gatherings of thousands of people. The same seems true of events in July. And, despite Benn’s optimism, the prospects for All Together Now in August and Electric Picnic in September look only marginally less bleak.

And that’s not even starting to take account of the theatres, music venues, galleries and cinemas around the country whose ongoing future is uncertain.

What happens to the hundreds of thousands of people who’ve bought tickets? To the artists and workers and traders who’ve signed contracts? To the commercial promoters who run the music festivals and the non-profit charities who run the arts ones? The answer, as with so much else right now, is we just don’t know. What we do know is that the cultural landscape on the other side of the pandemic will be very different from the one we’ve known.

The Impossible Dream: placing the Steorn story in the context of the Celtic Tiger
5