Ivana Bacik: We need a universal care system providing community-based supports for all 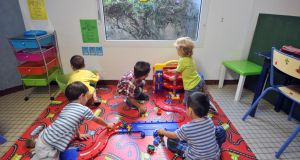 ‘Over decades, the failure of successive governments to take responsibility for a national childcare policy has resulted in the emergence of a piecemeal, laissez-faire system.’ Photograph: Frank Perry/AFP/Getty Images

Covid-19 is exposing many dark corners of Irish life – and has made the failings of our national care systems glaringly clear. During lockdown, people across Ireland have demonstrated exceptional ability to provide voluntary care to vulnerable community members. A proliferation of neighbourhood-based groups have sprung up in urban and rural areas alike, truly showing “we are in this together”. But beyond pandemic times, this remains true. Our society is only ever as strong as its weakest link; so now is the time to fix our care failures and move beyond traditional voluntary models.

Over decades, the failure of successive governments to take responsibility for a national childcare policy has resulted in the emergence of a piecemeal, laissez-faire system with the highest proportion of private providers in the OECD. Childcare costs have risen despite early-childhood care and education scheme subsidies, meaning that parents in Dublin can be paying as much as €1,000 per month per child. High fees and below-average levels of State investment are accompanied by chronically low wages for those working in the sector. In March, a staggering 61 per cent of childcare workers were earning below the living wage of €12.30 per hour. Unsurprisingly, Covid-19 has made matters worse. A survey conducted by Siptu revealed that, since returning to work post-lockdown, 29 per cent of childcare staff are earning less than before the pandemic. Alarmingly, 32 per cent indicated that they intend to leave the sector within a year.

As part of the July stimulus, the Government allocated €300 million to support facilities in reopening, but reports persist of multiple centres closing, leaving parents desperate to secure alternative places – or relying on the kindness of grandparents. Despite great efforts by all concerned, hands-off childcare policies are failing parents, staff, providers – and ultimately children. Low levels of pay, lack of consistency and inadequate State support do not enable provision of the high-quality early-years education so vital for children’s development. ‘Childcare’ should be seen as an integral part of a State-funded education service; not just a private optional add-on for a minority of parents.

Unfortunately, the same hands-off approach is evident in care provision for older people. Like childcare, the elder care sector is organised on a piecemeal basis, through a patchwork of local authorities, voluntary organisations and State agencies. This is not a system that can guarantee the highest standards of care – as became evident with the many Covid outbreaks in nursing homes. Disjointedness has rendered the system dysfunctional. Currently, 80 per cent of the 31,000 nursing home beds in Ireland are private, with the sector heavily subsidised through programmes such as Fair Deal. But nursing homes, particularly smaller facilities, continue to cite inadequate supports. Reports of low pay and poor conditions for staff working within the sector are also widespread. Closures are par for the course, leaving families and older people scrambling to arrange necessary care, often without any reasonable notice.

Indeed, despite years of State funding for Sisters of Charity-run care facilities in Dublin, reports emerged recently that the religious order and related companies are closing the St Mary’s, Caritas and St Monica’s centres, leaving vulnerable residents without homes; and staff denied decent treatment. Just one example of a group of older citizens left without the care they so badly need.

In short, a radical overhaul is necessary to address systemic failings in our national care systems. In pre-Covid times, the Labour Party general election manifesto called for a universal public childcare system and a robust, State-led approach to elder care. We proposed a pilot childcare scheme as a first step; catering to about 6,000 children (2 per cent of under-fours), using community-led, not-for-profit models. Fees would be pegged at the European Union average, a third of what parents currently pay. Funded through existing tax revenue, such a programme would cost €60 million and could be scaled up nationwide. To address failings in elder care, we proposed extending home care services and personalised budgeting to provide greater autonomy for older people; extension of State cover to reduce insurance premiums for providers; and increased inspections for facilities.

Although the economic climate has changed significantly since the election, the need for change is greater than ever. In the long term, we need a universal care system providing community-based supports from cradle to grave for all, regardless of socioeconomic status.

This is an ambitious plan for unprecedented times – but it can be done. More than 70 years ago, out of the ruins of the second World War, the National Health Service (NHS) was launched in Britain by Attlee’s Labour government – providing universal healthcare, paid for through taxation, free at the point of access.

Out of the devastation caused by Covid-19, we have the chance to build such a legacy here. Perhaps Ireland’s “NHS moment” has arrived at last – after all, we are in this together.