Rule Britannia may just be a song, but what row symbolised was something far greater 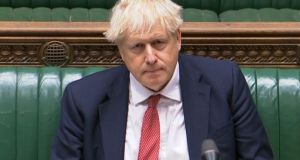 Boris Johnson: The Proms debate was too good of a moment for him to pass up. He said: “I think it’s time we stopped our cringing embarrassment about our history, about our traditions and about our culture, and we stopped this general bout of self-recrimination and wetness”. Photograph: AFP via Getty Images

Should those Shelbourne Hotel statues have remained in situ? Was Winston Churchill a great statesman or should he be viewed as a callous racist? Are the lyrics of Rule Britannia offensive or should Britons sing the patriotic number with pride? Are mandatory face masks a crude imposition on our basic civil liberties?

If you care about the answers to these questions you have – perhaps unwittingly – embroiled yourself in the latest instalment of the culture wars.

It seems nothing of late can escape our fervour for mud-slinging and social media spats over the cultural values we hold dear. Most recently the BBC has found itself at the epicentre of the tedious charade – with the broadcaster’s new director general, Tim Davie, reportedly believing the BBC’s comedy output is too one-sided and in need of a “radical overhaul”, thanks to its supposed left-wing slant (pray tell, what is a “right-wing joke”?).

For politicians, the answer to this question is an easy one

And only weeks earlier, when the BBC announced an orchestral-only version of Rule Britannia! would be played on the Last Night of the Proms, an almighty row was triggered over the propriety of the anthems lyrics (“Britons never, never, never shall be slaves” is the line that draws the most ire).

The BBC said the decision was due to the fact there will be no audience to sing along to the song (due to Covid-19 restrictions), while conflicting reports emerged that the conductor believed the lyrics to be inappropriate in view of Black Lives Matter protests.

In his first week on the job Davie reversed the decision and scrapped the orchestral-only version in favour of singers on the screen - in what has been gleefully described by right-wing pundit Dan Wootton as the “first major anti-woke move” by the new boss.

What is it with our inclination to reduce everything to a culture war? In the case of the Proms, what could have been a gentle dialogue about history, philosophy and patriotism is instead siphoned into a vituperative conflict between two groups: the anti-Woke brigade versus the enlightened progressives; the bleeding heart liberals versus the true patriots.

For politicians, the answer to this question is an easy one. The Proms was too good of a moment for Boris Johnson to pass up. Wading into the debate he said: “I think it’s time we stopped our cringing embarrassment about our history, about our traditions and about our culture, and we stopped this general bout of self-recrimination and wetness”.

As the culture wars emerge as a proxy for political debate, Johnson was smart to capitalise on the row. He could signal his political values, bolster his conservative credentials (credentials that, so far, have been lacking throughout his tenure), all the while avoiding substantive discussion on his patchy track record in government.

That the culture wars can provide a compelling distraction from the substance of politics might be true but there is something more sinister going on. Johnson’s political primacy may so far leave a lot to be desired, but this is a sacrifice his electorate ought to make (he might argue). Rule Britannia may just be a song, but what the row symbolised was something far greater. Patriotism, British values, a history to be proud of – these things require protecting at all costs, and Johnson is the only man who can do it. The deluge of policy failings that might come along with this brave stance will have to be tolerated for the greater good.

If you were to ask Johnson why he was so keen to make his case on Rule Britannia he might reply: this is not just politics at stake, but our very way of life.

If the case for engaging in the culture wars is so transparent when it comes to our politicians,why are we so quick to indulge the pantomime? It seems that by parading around our cultural instincts we too are representing something far greater about ourselves.

The Remainer vs Leaver divide, which emerged in a meaningful way in 2015, has consolidated this notion that our politics and our cultural values are inseparable.

“Remainer” emerges not just as a position you might hold on the function of the European Union to the British State, but as shorthand for the exact person you want to present as: liberal, urban, a champion of multiculturalism, you name it. No matter that this has eradicated vast swathes of nuance from the political landscape of the Brexit vote – nuance is the enemy of the culture warriors.

As the battleground before the electorate has becomes songs at the Proms, or the cultural capital you gain by being a Leaver or a Remainer, we are witnessing in real time cultural arguments overtaking economics and policy “as the driving force of our political debate” (as Helen Lewis put it two years ago in the Financial Times).

It is unedifying at best, dangerously and myopically divisive at worst. But it seems the nation’s favourite pastime is simply too tempting (for politicians, pundits and the electorate alike) to pass up.

1 Graham Norton: ‘I wanted out, out, out of Ireland’
2 Covid-19: Seventy cases in Cork traced to local pubs and restaurants in recent weeks
3 Speed and distance Covid-19 droplets travel tracked by researchers in Mater hospital test
4 Olivia O’Leary: If you move to Carlow, there are things you’ll have to get used to
5 Eighteen revelations from a trove of Trump tax records
Real news has value SUBSCRIBE