‘Lady Muck’ – An Irishwoman’s Diary on flaunting it 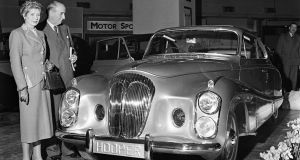 Sir Bernard and Lady Docker. Known by the gossip columns as “Naughty Norah”, she married three millionaires and spent their money with relish. Photograph: Getty Images

Many years ago, my mother went through a brief phase of inventing words and expressions. “He was hyrannical,” she would say, to describe someone who had worked themselves into a frenzy of anger. I imagine she was dithering over the words hysterical and tyrannical one day and merged them to create this excellent word. She was also fond of accusing us – mainly me – of acting like “Lady Muck of Clabber Hill”.

What would trigger this accusation? Well, once I asked if my sandwiches could be cut into triangles. I had ambitions to rise through the social ranks and had observed that the children of doctors and solicitors favoured triangles while we farmers’ children were stuck with the pedestrian rectangles. Seeking triangular sandwiches correctly marked me out as someone with pretences of grandeur. Wondering if we could deviate from the weekly jelly and custard on a Sunday could also merit a Lady Muck accusation. Although we did later throw financial caution to the wind by adding Angel Delight and Instant Whip to the dessert rota.

Like hyrannical, I assumed that Lady Muck was born in my mother’s imagination. I liked to think that she was extremely rich and wore a fox fur to Mass and elbow-length velvet gloves. Whenever she fancied a triangular sandwich, she rang a little bell that summoned a maid in a starched apron. If she was in the mood, she might have Angel Delight for breakfast, dinner and tea as she sat in her vast mansion on top of Clabber Hill.

So, imagine my surprise when I stumbled across a sentence in the novel Atonement. Cecilia Tallis was called “Lady Muck” by her landlady. Was this our Lady Muck of Clabber Hill? Had Ian McEwan been eavesdropping on my mother as she went around Ballymote getting her messages? Would he be writing about hyrannical behaviour next?

I filed it away as a coincidence until I discovered several other references to the honourable lady. So, my mother had not invented Lady Muck. But who was she and where was Clabber Hill? There are as many explanations for that as there are fox furs in Lady Muck’s wardrobe.

Some say Lady Muck, and her equally well-heeled husband Lord Muck, were popularised by Native Americans. Others say they came from the north of England. The Scottish and the Australians also claim them.

The most entertaining theory suggests Lady Muck was inspired by a British socialite called Lady Docker. Known by the gossip columns as “Naughty Norah”, she married three millionaires and spent their money with relish. Her third husband, Sir Bernard Docker, enjoyed flashing the cash almost as much as she did.

As chairman of Daimler’s parent company, he commissioned a series of Daimlers, built to her specifications, including a gold-plated one, emblazoned with 7,000 tiny gold stars. A 1955 model had zebra-skin upholstery, because, obviously, mink was too hot to sit on. And the 1953 version included solid silver hairbrushes and red crocodile-skin luggage. Their yacht – the largest private yacht in Britain – attracted a stream of wealthy partygoers on the Riviera. The couple mixed with royalty and Hollywood stars such as Prince Rainier and Marilyn Monroe.

However, Lady Docker spectacularly fell out of favour with Prince Rainier. She had asked him if she could add her son to his guest list for Prince Albert’s christening. He refused and she ripped up a paper flag of Monaco in a temper. She was reportedly banished from Monaco for 25 years and her christening gift was returned.

Sir Bernard was later removed as chairman of the Daimler parent company because of concerns that that company was funding the couple’s luxurious lifestyle.

The cars were returned and, in retaliation, Lady Docker bought a Bentley Continental from Daimler’s rival, Rolls Royce. The couple later moved to Jersey, but Lady Docker insulted the island’s people by calling them “the most frightfully boring, dreadful people that have ever been born”.

While I’d love to think that Lady Docker was our Lady Muck of Clabber Hill, that theory doesn’t stand up as there are several references to Lord and Lady Muck before she achieved notoriety. And there is no mention of Clabber Hill among her many homes.

The only reference to Clabber Hill I could find was a road in Maryland, in the US, which might give credence to the suggestion that the expression came from America.

What became of Lady Docker? This is where the story takes a sad turn, as she died alone in a London hotel room at the age of 77. While other celebrities such as the Beckhams and the Kardashians flaunt their wealth, Lady Docker has been forgotten. She revelled in the media spotlight so I’m sure she would be very cross about that. I’d even go so far as to say she would be absolutely hyrannical.