The Irish Times view on Catholicism: the centre moves south 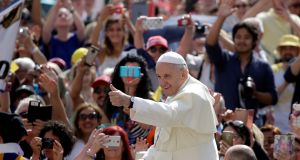 The referendum last Friday confirmed what has been known for some time – that the Catholic Church and Ireland have grown apart. Clearly, many practising Irish Catholics are no longer willing to adhere to the church’s social teachings, particularly when it comes to sexual matters.

They now act in accordance with their conscience rather than dogma. In so doing, ironically, they are motivated by probably the greatest Christian virtue: compassion.

Both sides in the referendum insisted their motivation was compassion. But it is so much easier to feel the pain of a woman who had an abortion in difficult circumstances than relate to an essentially abstract unborn. It was similar with the same-sex marriage referendum. Stories of suffering endured by a vulnerable few moved the Irish public to comparatively radical change. The sky would fall in, they were warned. It didn’t.

What did fall was the standing of the Catholic Church in Ireland. The experience is not peculiar to it either. All four main churches on the island opposed repeal of the Eighth Amendment, as did Evangelical Alliance Ireland. Institutional Christianity is in trouble in Ireland. All churches have a declining and ageing membership.

That trend suggests Ireland has become more western European in its thinking on religion. Research published this week found that the majority of western Europe’s Christians are non-practising. Conducted by the Washington-based Pew Research Centre, the study showed that the continent where Catholicism has been based for most of its history and Protestantism began is now one of the world’s most secular regions. This was recognised early in his papacy by Pope Francis, who told the European Parliament in 2014 that Europe, from a church perspective, was “a tired grandmother, no longer fertile and vibrant”.

Taking a wider perspective, the situation is very different. The global Catholic population increased 7.4 per cent in the first five years of this decade, to 1.285 billion. Africa had the largest percentage growth, increasing by an extraordinary 19.4 per cent between 2010 and 2015.

Almost 49 per cent of the world’s Catholics live in the Americas, including the Caribbean, 17.3 per cent are in Africa, 11 per cent in Asia, and just under one per cent in Oceania/the South Pacific.

Only three of the top 10 Catholic countries are now in Europe. By population those that make up the top 10 are Brazil, Mexico, the Philippines, the US, Italy, France, Colombia, Spain, the Democratic Republic of Congo, and Argentina.

Today, Europe is home to just over a fifth, or 22.2 per cent, of the world’s Catholics. And as the centre of the Catholic world moves south, Europe is an increasingly insignificant part of the whole. The church in Europe may look tired and jaded, but in many parts of the world, it’s in rude health.

1 Brightest comet of the century visible in Irish skies for the next week
2 Reopening of pubs that do not serve food may be delayed beyond July 20th
3 Johnny Depp: Ex-wife or friend defecated in bed in ‘fitting end’ to marriage, court hears
4 Monster or machine? Everything we know about coronavirus after six months
5 Pat Leahy: Fianna Fáil acting like a circular firing squad
Real news has value SUBSCRIBE