The Irish Times view on Gaza: on the precipice 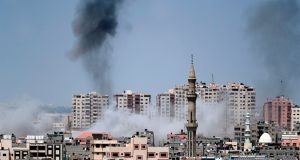 The Israel-Gaza border fell quiet on Wednesday, but the previous day’s exchange of rockets and air strikes – the most intense flare-up of hostilities since the 2014 war – was a reminder that tensions could easily tip over into a prolonged conflict.

Dozens of rockets and mortars were fired from the Gaza Strip into Israel through Tuesday and into Wednesday morning, prompting Israel to respond with tank and air strikes on more than 50 targets in the enclave. It had initially been assumed that Islamic Jihad had carried out most of the attacks after Israel killed three of its members on Sunday, but the armed wing of Hamas, which controls the strip, claimed joint responsibility. The two groups said they acted in response to Israel’s killing of at least 116 Palestinians since March 30th at Gaza border protests. Israel said three of its soldiers were injured by rocket-fire.

Egypt appears to have mediated a ceasefire between the two sides, but the terms of the “understanding” did not go beyond a restoration of calm. That’s welcome, in that it allows the people of Gaza and southern Israel to resume their daily lives, at least for now. But nobody should be under any illusions about the longer-term outlook. The humanitarian crisis in Gaza worsens by the week, as does the sense of desperation among its people and the tensions between Israel and Hamas.

In the absence of a peace process, the urgent focus must be on easing the blockade of Gaza while ensuring Israel’s security. At a minimum, the people of Gaza must be given greater freedom to travel and trade. Infrastructure must be upgraded, while reconciliation between Hamas and Fatah would improve the strip’s civil administration.

International aid, from Europe in particular, plays a vital role, but ultimately it can only address the symptoms of Gaza’s condition, not the cause. International efforts must therefore focus on a lifting of the blockade. The events of recent days suggest neither Israel nor Hamas wants a full-scale military confrontation. But with tensions as acute as they are now, it wouldn’t take much to plunge the region into another catastrophic war.

1 Scientists uncover biological signatures of the worst Covid-19 cases
2 Covid-19 may spread more easily in schools than thought, US report warns
3 No time limits and no pre-booking: what the unpublished pub reopening guidelines reveal
4 Wifi problems? Quick tips to get your home internet out of the slow lane
5 ‘I wandered around Dublin wondering: Is this what they call a capital city?’
Real news has value SUBSCRIBE