Diarmuid Ferriter: Our appetite for the TV series The Crown shows no sign of dimming 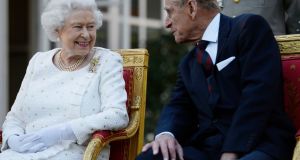 Queen Elizabeth II and the Duke of Edinburgh attending a garden party in Paris in2014. Photograph: Owen Humphreys/PA Wire

Almost 20 years ago, Irish Dominican monk Patrick Hederman told an amusing story about his mother. In 1936, she seemed very knowledgeable about the royal abdication crisis as a result of Edward VIII’s relationship with Wallis Simpson, despite attempts to keep such filthy foreign news out of Ireland: “When my mother began to tell people at parties in Dublin, they thought she was off her head. Being a conscientious Catholic she asked a Jesuit priest whether it was libel, detraction, or scandal to be spreading news that was common knowledge in America but completely unknown over here. ‘I’m not quite sure which it is’, he said ‘but it’s very interesting, tell me more’”

The interest was sustained over the decades; Mary Kenny’s 2009 book Crown and Shamrock is an intriguing dissection of what she calls “love and hate between Ireland and the British monarchy”. In the summer of 1953 when she was aged 9 and living with her aunt and uncle in Sandymount, they, leaving Mary behind, headed off to a private soirée in the local Methodist Hall where, behind closed doors, they watched the film of the coronation of Queen Elizabeth II. When this was revealed to Mary, she was told not to tell anyone: this was a clandestine and guilty pleasure, it seemed, especially because Dublin cinemas had withdrawn plans to show it following bomb threats from the Anti-Partition League.

6 Róisín Ingle: The gin is now part of my daily routine

8 ‘I think my husband has a drug problem, but he says that’s nonsense’

9 Gordon D’Arcy: Irish lineout has to move past mess of 2020 for the Six Nations

14 Kathy Sheridan: Pandemic is reminder of poison in British and Irish politics

17 Ministers optimistic Leaving Cert exams will go ahead this year

19 Covid-19: International travel may not be possible by Christmas – Varadkar

22 Can five minutes’ exercise a day make you fit?

26 Coronavirus: What happens when the lockdown ends in March?

29 Michael Harding: Just after Christmas, I began talking to the birds

30 Seán Moran: When GAA players were shyer about being the retiring type

31 Range Rover Sport D350: Fab to drive. But everyone you pass will hate you

39 Walk this way: 17 tips for getting the most from your daily lockdown outing