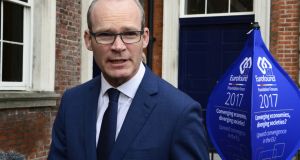 Minister for Foreign Affairs Simon Coveney. Irish diplomacy has been on a steep learning curve in the wake of the EU referendum in Britain. Photograph: Cyril Byrne

In the middle of December, as political and diplomatic attention was fixated on Brussels and the latest hiccup in the UK’s attempt to leave the European Union, Simon Coveney made a quiet but significant announcement. The Minister for Foreign Affairs said he had ordered a “comprehensive review” of this country’s relationship with Germany.

As is clear from the manner in which the EU is conducting the Brexit negotiations, Ireland has a lot of friends in Europe. It is thanks to sterling work by our diplomats and politicians that the question of the Border has received such painstaking attention from Michel Barnier, the EU’s chief Brexit negotiator. Indeed, the EU has paid more attention to that thorny problem than have the British, as became embarrassingly obvious in recent weeks.

On the issue of Brexit, there is sympathy and solidarity for Irish concerns among European political leaders. Taoiseach Leo Varadkar said Dublin had “achieved all we set out to achieve” in the first round of the negotiations between Brussels and London on the terms of the UK’s departure from the EU. For that, we owe a debt to our friends in Europe, including Angela Merkel, the German chancellor.

Yet sympathy and solidarity are finite commodities in international relations. The first round of the Brexit process was the easy bit – there was unanimity among the EU27 that the UK had to meet its financial obligations, protect the rights of EU citizens in the UK, and address the contradictions in its assertion that it wants to leave the single market and the customs union while also not creating a hard border in Ireland.

Varadkar was handed what amounted to a veto on whether the EU considered that sufficient progress had been made on these three issues, and he played it smartly.

In the second phase of the Brexit process, which will begin in the spring, Ireland will not have a veto. This phase will address the future of the relationship between the EU and the UK – assuming the divided government at Westminster knows what that relationship might be. It is probable there will be 27 differing views in the EU on what the future relationship with the UK will be, and how important it is. For Ireland, it is vitally important; for Croatia, perhaps not so much.

This is why Coveney’s initiative is timely. Given the shifting allegiances within the EU that Brexit is causing, it is important that our relationship with Berlin is strong and durable. Yet there seems to be an unstated assumption in the initiative – that the Irish-German relationship is not what it should be. Germany is the EU’s richest, most powerful and most influential member now and it will be in the future. That our relationship with it is in need of a “comprehensive review” ought to be just a little troubling.

And if the Dublin-Berlin bilateral relationship needs nurturing, what about our relations with Warsaw? Or Vilnius? Or Riga? Ireland is home to tens of thousands of Poles and other citizens of eastern European states, who came here during the economic good times. Many of them stayed and are becoming Irish citizens. That is wonderful for Irish society. It also raises a question – has Ireland’s diplomatic and political relationship with Poland and the Baltic states expanded and deepened to reflect those new and valuable links?

Irish diplomacy has been on a steep learning curve in the wake of the EU referendum in Britain. For the past 20 years, much of our political and diplomatic capital – in both personnel and money – has been invested in normalising the Irish-British relationship after the Belfast Agreement created a new dynamic between Dublin and London. That was understandable.

Yet it had costs that were exposed by the shock of Brexit. When Paolo Gentiloni, the foreign minister of Italy (and now the prime minister) visited Dublin shortly after the UK referendum, he was the first holder of that office to make a bilateral visit to Ireland in 20 years. Of course, Irish and Italian ministers meet all the time in Brussels. But bilateral ties are crucial – Irish-Italian relations should not be moulded solely through Brussels.

Brexit is forcing Ireland to make political and diplomatic choices it never wanted to make. We want to be friends with everybody. It would be lovely if that were possible, but it is not a realistic foreign policy. It may be, during the second phase of the Brexit process, that our interests diverge – perhaps radically – from what some of our EU partners want from their future relations with London.

In a thoughtful speech at University College Dublin at the end of November, The Europe We Want, Coveney made the point that, while Brexit is important to most EU countries, “it is not always at the top of their agendas”. That is likely to become quite clear as the pitiful spectacle of the UK extracting itself from the EU grinds on in 2018.

Ireland is not entering this watershed moment on the back foot. There is an Irish Embassy in every EU capital; the missions in Berlin, Brussels, London and Paris have been strengthened. Coveney said he wanted to double the Irish “diplomatic footprint” in the medium term. My experience of Irish diplomats abroad is that they are invariably excellent (as are the British, the French and others). Politically and diplomatically, they may never have mattered more – whether in Berlin or Bulgaria – than now.

1 Cork shootings: Gardaí find lengthy apparent suicide note on one of the dead men
2 Róisín Ingle: Five small ways to find joy in a pandemic. Only one of them is illegal
3 Michael McDowell: We must check if this Covid-19 lockdown is really necessary
4 Former solicitors ran an ‘identity factory’ in committing fraud – court told
5 Gordon D'Arcy: Ireland must go after victory by frightening France into mistakes
Real news has value SUBSCRIBE