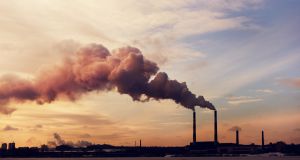 Are the Taoiseach and Minister for Finance concerned about Ireland’s climate failings, and are they willing to expend political capital to address the issue? Photograph: iStock

Ireland has failed to get to grips with its climate targets. Over the past month, the Citizens’ Assembly, the Climate Change Advisory Council, and the Environmental Protection Agency have all called for urgent new measures to meet Ireland’s climate obligations. A New Climate Institute report ranked Ireland last in Europe, and even EU Commissioner Phil Hogan stated that “Ireland needs to wake up, and fast . . .”, on climate change.

Ireland’s failure to meet its relevant EU obligations could cost from €150 to €455m by 2020, according to a recent estimate-possibly more than the Luas cross-city line. Worse still, carbon costs could increase to several billion by 2030.

It is often argued by policy makers that purchasing carbon credits, while unfortunate, is more cost-effective than reducing emissions at home. I would respectfully disagree. There is an approach to reducing emissions that would boost growth, spur innovation and reduce import dependency, all at no exchequer cost. Best of all, it involves cutting labour taxes.

Between 2008 and 2016 the share of labour taxes (income tax, USC and PRSI) in total tax revenue increased from 31 per cent to 36 per cent, reducing the reward for work. The key to addressing climate change is rebalancing taxes away from labour and putting more money in citizens’ pockets. There are a variety of ways that this could be achieved. According to the Revenue Commissioners, eliminating the 0.5 per cent rate of USC and reducing the other rates by 1 per cent each would yield a total saving for taxpayers of €872 million. Alternatively, reducing the 20 per cent and 40 per cent income tax rates by 1 per cent each would yield a saving of roughly €937 million. Another option is to reduce the 20 per cent rate by 1.5 per cent, for a reduced deduction in the region of €925 million. The typical taxpayer could expect a windfall in the region of €500 per year.

In order to fill the hole in exchequer finances, a moderate increase in the price of coal, oil, gas for heating, peat, diesel and petrol is required. An increase in the carbon tax by €50 euro per tonne would raise up to €1.2 billion in revenue, assuming no change in behaviour. Taxing bad things (like environmentally destructive pollution) makes sense, especially when we can alleviate the burden on hard-working families at the same time.

Increasing the carbon tax gives households choices and encourages short- and long-run changes in behaviours. Electric vehicles and hybrids are, all of a sudden, going to become more attractive, as are highly efficient conventional vehicles, because petrol and diesel are going to be pricier by 13 cent per litre. Many commuters have options to rely more on public transport, cycling and walking. Others, it is true, are locked into car-dependent lifestyles and would have to use their tax windfall to pay for higher transport costs, at least until the time comes to purchase a new vehicle.

The other major impacted area is home heating. An electric heat pump or wood-burning stove will suddenly seem like a great deal, and before long service providers will proliferate, just as they have done in countries like Sweden and Denmark. That deep insulation retrofit that Ms and Mr Jones have been considering is going to become a greater priority, and thriving new economic sectors will emerge. A bale of briquettes will cost and extra €1.30, and a 25kg bag of coal is going to cost an extra €3, which means that wood-based solid fuel products will take up more and more shelf space. If the tax can be accompanied with low interest loans to help householders make deep retrofit investments, all the better.

It is essential to ensure that the impacts are managed carefully for the most vulnerable in society. Increased welfare payments and fuel allowances could offset any negative impacts for the elderly, the unwell and the unemployed.

A big bang in Budget 2019 is one possibility, or implementation could be phased in over three budgets. Revenue from the tax would decline over time as citizens transition to lower carbon usage, and annual modifications could ensure that a neutral-revenue position is maintained.

The real concern is not around the economics – Switzerland and Sweden have higher carbon taxes than at the rate proposed, and both are thriving. It is about the politics. Is climate a genuine priority for the current administration? Are the Taoiseach and Minister for Finance concerned about Ireland’s climate failings, and are they willing to expend political capital to address the issue? Can other political parties be brought on board through consultation before the next budget?

There is no reason why cutting income taxes could not be widely popular. It is worth recalling that the plastic bag levy was approved of by a remarkable 91 per cent of the electorate. The key is to ensure that vulnerable are protected, and that alternatives to break free from high-carbon lifestyles are available. When achieved, small changes connected to our daily routines can be surprisingly satisfying and empowering.

Joseph Curtin is a Research Fellow at the Institute of International and European Affairs and University College Cork, and a Member of the Government’s Climate Change Advisory Council. Opinions expressed are the author’s alone.