Echoes from the recent past 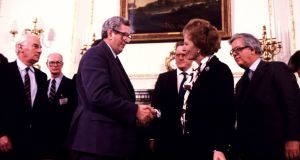 State papers from 1987 include a letter from Garret FitzGerald to Margaret Thatcher before he left office in which he forecast that despite Charles Haughey’s hostility to the Anglo-Irish Agreement and extradition while in opposition he would honour both commitments when he became Taoiseach. Photograph: Photocall Ireland

Official files from 1987, which will be opened to the public this week, show that while there have been great changes over the past 30 years, some of the big issues that occupied the minds of politicians and officials back then continue to have resonance today. Then as now exchanges between the Taoiseach and the British Prime Minister were hugely important and absorbed a great deal of attention from senior officials on both sides.

Determined efforts to get the public finances in order were a feature of 1987 and while, thankfully, today we are on the way out of the most recent economic crisis, the files show just how prone this country is to getting itself into difficulty.

One big difference between now and 1987 is that back then the terror campaign of the Provisional IRA was in full swing and it culminated in the Enniskillen remembrance day bombing that left 12 people dead. One of the consequences of that atrocity was that it gave the Fianna Fáil minority government of Charles Haughey the excuse to proceed with extradition for terrorist suspects despite considerable opposition from within the Fianna Fáil party and from outside it.

The year began with the Fine Gael/Labour coalition led by Garret FitzGerald failing to agree on a budget and the Dáil was dissolved. Fianna Fáil failed to win the expected majority, mainly because of the impact of the recently founded Progressive Democrats, but Haughey was narrowly elected taoiseach in March. One of the interesting documents in the files is a letter from Garret FitzGerald to Margaret Thatcher before he left office in which he forecast that despite Haughey’s hostility to the Anglo-Irish Agreement and extradition he would honour both commitments when he became Taoiseach.

That forecast was correct and the transcripts of two meetings Haughey held with Thatcher over the course of 1987 confirmed they developed a reasonable working relationship.

The files from the Department of Foreign Affairs reveal details of the behind the scenes contacts between Irish and British officials which ensured that the various institutions established by the Anglo-Irish Agreement worked as efficiently as possible.

The files also reveal the efforts of the Irish Government to help the SDLP in the British general election as well as comments from a range of contacts among Northern nationalists, including a number of prominent churchmen, on the course of developments.

As in previous years the Departments of the Taoiseach and Foreign Affairs provide the bulk of most interesting files. And despite the Government’s expressed desire to move to a 20-year release date, in line with the British, little progress appears to have been made on that objective to date.