There is no Trump administration – there are several

On a range of issues, Washington continues to say one thing and do another 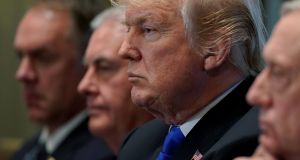 Would the presidency give Donald Trump free rein to act on his wilder impulses and see through his rabble-rousing agenda – in other words, would the world get the full, unadulterated Trump? Or would the bureaucratic machinery of government constrain him, exerting a moderating influence to dilute his radicalism and ensure continuity over disruption? In January, when Trump was sworn in as US president, this was a question that preoccupied the US’s allies.

It turns out that the question was wrong-headed to begin with. Almost 12 months on, it’s clear that these scenarios are mutually exclusive only if we assume a baseline of policy coherence. In fact, in Trumpland, contradictory positions co-exist out in the open. Washington’s voice has become a cacophony of dissonant emissions. There is no Trump administration; there are several. Figuring out which is in the ascendant on any given issue has become a recurring headache for the rest of the world.

The problem was on full display earlier this month, when Trump published his national security strategy. By and large the document is a mainstream conservative policy manifesto. It stresses the importance of upholding alliances, singles out the threats posed by authoritarian powers and acknowledges the benefits of the postwar international system the US did so much to create and maintain. The strategy calls Nato “one of our great advantages over our competitors” and warns that Russia is “using subversive measures to weaken the credibility of America’s commitment to Europe”. In a thinly veiled reference to interference in 2016 presidential election, the strategy states: “Today, actors such as Russia are using information tools in an attempt to undermine the legitimacy of democracies.”

For US allies, all of this makes for encouraging reading. The problem is that Trump appears to believe none of it. We know this, because in his speech to launch the national security strategy, the president contradicted key parts of it. He downplayed alliances and values, focused on domestic security, reverted to the dystopian language of his “America First” campaign and barely mentioned Russia – let alone as a competitor or a threat. Indeed it took Trump almost 20 minutes to mention the strategy at all. If he had even scanned it – unlikely, given that he has admitted to reading little and reportedly prefers pictures to words – he would have seen that the document is fundamentally at odds with his own thinking on Russia, Nato, human rights and the projection of American values.

This disconnect has been a theme of Trump’s foreign policy. Take North Korea. On December 12th, secretary of state Rex Tillerson remarked that the Trump administration’s stance was “really quite clear”. He said: “We’re ready to talk any time North Korea would like to talk, and we’re ready to have the first meeting without precondition.” However, a few days later, at the United Nations, Tillerson had changed course. Pyongyang would have to stop “threatening behaviour” before talks could begin, and “earn its way back to the table”. A few months earlier, when Tillerson had suggested Washington was open to talks, Trump immediately undercut him. The secretary of state was “wasting his time trying to negotiate with Little Rocket Man”, Trump tweeted.

At least on that issue Trump himself has been consistent. On the 2016 election, the unambiguous view of US intelligence and national security institutions is that Russia interfered. Trump, however, has expressed at least three positions at different times: he believes the US intelligence community, he believes Vladimir Putin’s denial, and he believes it will be impossible ever to know (“maybe they did, maybe they didn’t”).

On a range of other issues, Washington says one thing and does another. Trump favours relaxing or removing sanctions against Russia, but the system – in this case Congress – has stymied him by renewing the measures. The White House appeared to support Saudi Arabia’s botched diplomatic blockade of Qatar – much to the alarm of the Defence and State departments, prompting the latter to dispatch Tillerson to the Gulf to ease the stand-off between two vital US allies. On Iran, Trump has announced that the US will repudiate the nuclear deal despite the assessment from US intelligence and American allies that Iran remains in compliance. By failing to recertify the deal in October, Trump has kicked to Congress the question of whether to reimpose sanctions against Tehran.

On one reading, such tension at the heart of American policy-making might reassure allies. It suggests that, on some issues at least, Trump’s worst instincts are counterbalanced by strong institutions, notably Congress and the defence-intelligence apparatus.

Few governments are likely to see it that way, however. Even if Trump’s rhetoric were seldom to translate into hard policy, those tweets can have real-world consequences. In diplomacy, words are actions. What America’s friends are learning is that, under Trump, Washington cannot be counted on. That unsettling realisation won’t produce an abrupt break – the US remains too powerful for any ally to risk that – but in time it will push the US further to the margins, shouting incoherently as its soft power fades.