Ireland cannot be complacent about populism 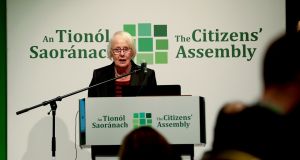 A large percentage of immigrants have become Irish citizens. However, these Irish citizens are in many ways invisible or marginal. We should establish a new Citizens’ Assembly on Ireland as a Diverse Republic to address this. Photograph: Maxwells

Extreme right-wing populism has reared its ugly head across Europe. Whether it’s Orbán’s Hungary the UK’s shenanigans over Brexit, the coalition governments in Austria and Italy, or the vote gains (in some cases quite dramatic) across a spate of Europe’s established democracies, there is no doubting that right-wing populism is on the rise.

The UK’s decision to leave the European Union was driven, to a considerable extent, by opposition to the free movement of migrants from the post-2004 enlarged European Union.

Ireland attracted similar levels of migration but has for the most part remained politically indifferent to the great transformation to Irish society this has wrought. Ireland so far appears immune to anti-immigrant populism, but for how long can we count on this?

Even when austerity bit, the banks collapsed and the country experienced an almost existential crisis no major political figure followed the anti-immigrant playbook. During the austerity period there was little or no hostility to immigrants within Irish politics.

The reasons for this perhaps included a keen sense of the dangers across Ireland’s political spectrum, based on long experiences of sectarian conflict, of whipping up nationalist fervour.

In Ireland as elsewhere, exclusionary conceptions of national identity can exert a powerful force. The 2004 Citizenship Referendum seemed to defensively define Irishness; almost 80 per cent of voters supported removing citizenship at birth to the Irish-born children of immigrants. The outcome of the Referendum indicated that nationalism still mattered hugely.

Yet also in 2004, in what turned out to be a radical act of social engineering, Ireland became one of just three countries that did not impose any restrictions upon the free movement of migrants from the new east European EU member states. According to the 2016 census some 17 per cent of the population of the Republic of Ireland were born abroad.

Post-2004 political rhetoric and policy debates mostly talked up the economic benefits of immigration: the national interest and economic growth were portrayed as one and the same. At a time when some other European countries were having tortured deliberations about migrant integration and national identity, integration in the Irish case was pretty much defined as participation in the labour market. For example, Managing Migration, a 2006 report by the National Economic and Social Council, credited the persistence of economic growth to ongoing immigration.

The social partnership consensus was that large-scale immigration was in the national interest and this in turn was to be exclusively defined in terms of economic growth.

However, this positive narrative may well come to be challenged as it has in other European countries. Ireland’s current approach to the integration of immigrants is one of benign neglect.

The political system and Irish institutions seem poorly prepared to deal with the emergence of the kinds of anti-immigrant populist politics that has caused huge damage to social cohesion in several other European countries.

A large percentage of immigrants from non-EU countries have become Irish citizens. However, these Irish citizens are in many ways invisible or marginal within politics, the Civil Service, the educational system, the media and other Irish institutions.

As in the UK before the Brexit referendum, only a tiny proportion of migrants from EU countries have sought naturalisation. As such they are excluded from meaningful participation in politics and decision making in the communities in which they have settled. There has been some ongoing debate about the need for political representation for Ireland’s emigrants. How immigrants living in Ireland might be represented in Irish politics warrants consideration within the same conversation.

Study after study identifies racism as a problem for black and minority ethnic communities in Ireland. Yet, the Irish state shut down its infrastructure for dealing with racism

Study after study identifies racism as a problem for black and minority ethnic communities in Ireland. Yet, the Irish state shut down its infrastructure for dealing with racism (the National Consultative Committee on Racism and Interculturalism) in 2008 and since then has offered zero leadership on what for many immigrants is a pressing issue in their lives.

The benign neglect of official Ireland of issues that have come to dominate politics in other societies is not sustainable. We should not assume that Ireland will escape the rising tide of populism without pre-emptive action.

As our recent national debate on abortion has shown, the Irish political system can work through difficult and divisive issues. Rather than allowing the far-right and its media mouthpieces to set the agenda on immigration and integration we should be pre-emptive; we should start a constructive national dialogue on our own terms about the opportunities (and challenges) facing our diverse republic.

The recent Citizens’ Assembly proved its worth as a venue for calm, reflective deliberation that fed back into our representative system of politics. Ireland is now seen (deservedly) as a world leader in the use of deliberative democracy to support the political system.

We should make use of our expertise in this area and establish a new Citizens’ Assembly on Ireland as a Diverse Republic.