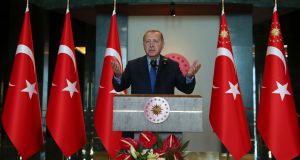 Turkey’s President Recep Tayyip Erdogan: If he is seen to be the architect of a financial collapse, it could be the beginning of the end for him. Photograph: AP

On August 17th, 1999, an earthquake struck the city of Izmit, in western Turkey. Seventeen thousand people were killed and half-a-million lost their homes. Eighteen months later, the country’s economy fell into a steep recession. Turkey was forced to ask the International Monetary Fund for assistance, and the lira, the country’s currency, was hit by a wave of speculative selling. Soon afterwards, a political crisis brought down the government.

These two extreme events, in a country inescapably prone to extremes, had two consequences. They impoverished a swathe of Turkey’s middle class. And they brought to power Recep Tayyip Erdogan, the charismatic and single-minded leader of a grassroots political movement that would transform Turkey over the next two decades.

Now Erdogan faces his own extreme moment. In the past two weeks the Turkish lira has collapsed on the foreign exchange market, falling by 16 per cent on one day alone last week against the US dollar. Foreign investors, upon whom Turkey is excessively dependent, have become alarmed at signs that the economy is in trouble. The current account deficit – the most telling signal that a country’s economic model is unsustainable – is flashing an angry red.

The foreign exchange crisis is swelling into a wider economic crisis in large part because the response of Turkey’s monetary authorities is incoherent. Erdogan, who is increasingly in the grip of flaky ideas about how economies work, refuses to allow the central bank to raise interest rates. He has appointed his son-in-law as finance minister. Worst of all, his extreme moment coincides with a breakdown in Turkey’s relationship with the US.

Isolated and friendless, Erdogan stalks the corridors of his vast presidential palace in Ankara, railing against the world. He sees conspiracies where others see an inability to understand the fundamental laws of capitalism

Isolated and friendless, Erdogan stalks the corridors of his vast presidential palace in Ankara, railing against the world. He sees conspiracies where others see an inability to understand the fundamental laws of capitalism. It is a dangerous moment. The Turkish people can accept a degree of political corruption and even nepotism, but Erdogan must know they will not tolerate economic disaster.

Erdogan’s economic policy, such as it is, can best be described as growth at all costs. Gigantic infrastructure projects and forests of new skyscrapers have fuelled a boom over the past two decades – the World Bank estimates that Turkey’s per capita economic output has doubled since 2001. That has liberated millions of Turks from poverty and exclusion.

Yet Turkey’s modernisation rests on shaky foundations. Growth has been financed by foreign borrowing, including some €150 billion of loans to Turkish companies and banks from European financial institutions.

As the lira sank to 6.5 to the dollar last week, local and foreign investors began to fear that those loans may not be repayable. That sent shivers not just through other emerging markets such as Argentina, but down the spine of the European Central Bank. Turkey’s problem, to this extent at least, is Europe’s problem, too.

Erdogan now faces an unprecedented challenge on two fronts. First, he needs to stabilise the economy. This requires him to allow the central bank to use all its tools – including a significant rise in the interest rate – to protect the lira. He is under pressure not just from events in the international markets but from local businesses to undertake a U-turn in economic and monetary policy as a matter of urgency.

The second is to rebuild relations with the US. Since a failed coup d’état two years ago that came within minutes of toppling him, Erdogan has launched a crackdown on his enemies, real and imagined. One man caught in this manic pursuit of vengeance is Andrew Brunson, a Protestant pastor who has lived in Turkey for two decades and has been in prison for the past two years, suspected of collusion in the coup.

Brunson was recently moved to house arrest, in what Erdogan believed was a deal with President Donald Trump in return for American help in securing the release of a Turkish activist held in Israel and a banker jailed in the US. Trump believed he had secured the preacher’s full release, and doubled tariffs on imports of Turkish steel to the US when the deal fell apart. Of such misunderstandings are international crises made.

If Erdogan is to avoid further US sanctions, he must facilitate Brunson’s release. This is an opportunity for the European Union, which is bafflingly silent on the unfolding crisis on its doorstep, to intervene to persuade him to do so. The EU has more to lose than does the US from an economic calamity in Turkey. But Brussels needs to go further, and offer Ankara improved customs union terms and a more generous visa regime as part of a complete rebuilding of the half-functioning Turkey-Europe relationship. The EU rarely offers true solidarity to Turkey. It is time for that to change.

But this is Erdogan’s crisis. Electoral success, neo-Ottoman delusions, and the arrogance of power have enabled him to shape Turkey into virtually a one-man state. The coup attempt was his excuse to sideline parliament: he rules essentially by decree. Such a violent redirection of the state comes with costs.

Many of Erdogan’s predecessors have been thrown out of office by economic mismanagement. After 15 years in power, his father-of-the-nation style grates on many young Turks. His claim to the loyalty of the masses now rests on his economic record. If he is seen to be the architect of a financial collapse that might exceed the calamity of 2000/01, it could be the beginning of the end of the tumultuous and transformative Erdogan.

Vincent Boland is a writer and commentator. He was was the Financial Times correspondent in Turkey from 2004 to 2008