Mick Wallace: To change An Garda, get rid of its hierarchy

This policing crisis exposes a culture where dissent is not tolerated 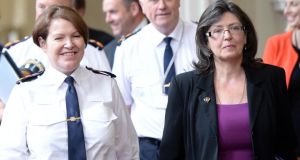 Clare Daly and I first met Garda whistleblowers Maurice McCabe and John Wilson in September 2012. Sgt McCabe highlighted a litany of failures and malpractice within An Garda Síochána, which were eventually vindicated by Garda Inspectorate reports and the O’Higgins report. We began to raise these issues in the Dáil, and on many occasions had to break Dáil standing orders to get the issues on to the record.

The response at the time, by the Fine Gael and Labour government, was to minimise and dismiss our allegations and mount personal attacks on anyone involved. McCabe and Wilson were wrongly accused in the Dáil chamber of having not co-operated with the internal O’Mahony inquiry into the allegations by then minister for justice Alan Shatter. Clare Daly was arrested and the details leaked to the media within 12 hours.

On Prime Time in May 2013, Shatter shared information about me of a personal nature, which he claimed came from then Garda commissioner Martin Callinan. It became very clear that when you question a pillar of the State, the wagons begin to circle.

This crisis in policing has been a long time in the making. In October 2008, the Morris tribunal completed its work, highlighting serious corruption, systematic failures in senior Garda management and working practices, the failure of accountability systems, and the impenetrable “blue wall of silence”. These problems were never properly addressed.

In June 2013, we introduced a 37-page Garda Reform Bill, which would have given more powers to the Garda Síochána Ombudsman Commission (Gsoc) and created an independent policing authority. The Bill was voted down by Fine Gael, Fianna Fáil and Labour. The following year, we introduced the same Bill again. This time it passed – only to be left rotting in committee stage, like most Opposition Bills.

Instead, the government introduced its own “unprecedented programme of reform”. But the final legislation establishing the Policing Authority was a serious row back. There was no role for the body regarding discipline, particularly in respect of discipline and underperformance at Garda management level. In contrast, the Northern Ireland Policing Board plays a strong role in discipline.

Not surprisingly, the weak legislation establishing the Policing Authority has resulted in a weak Policing Authority in practice. The body was supposed to have responsibility for senior appointments from the outset, but this was delayed till January 2017. In the vacuum, Garda Commissioner Nóirín O’Sullivan has appointed more than 40 senior officers. The Garda Commissioner still remains exclusively accountable to the Minister for Justice, and the Police Authority cannot even issue policy directives. Does that sound independent? Shockingly, after 10 days, the authority broke its silence to endorse the Garda Commissioner, which amounts to an effective slap in the face to Sgt McCabe and other whistleblowers.

The terms of reference for the tribunal of inquiry and the appointment of Mr Justice Peter Charleton are both to be welcomed. They are wide-ranging, which is what is needed. Our contacts with 10 serving Garda whistleblowers and several former members over the past five years suggests that a culture exists wherein dissent is not rewarded, to put it mildly.

It is not credible for the Garda Commissioner to remain in place when a tribunal has been established to investigate her, and I think the Government knows this.

O’Sullivan’s statements in public are at complete odds with her actions in private. In October 2016, she told the Oireachtas Justice Committee that “anyone who brings forward issues and concerns will be supported”. But Garda Nick Keogh made his protected disclosure on May 8th, 2014, to the then confidential recipient, Judge Pat McMahon. Following that, he was subjected to five internal investigations. McMahon has been out sick on and off since December 26th, 2015.

Does that sound like a police force that supports whistleblowers?

The Garda Commissioner denies any involvement in a smear campaign against McCabe, and stated on Friday “I didn’t know it was happening at the time it was happening”. Her instructions to her legal team during the O’Higgins commission – to attack McCabe’s motivation and credibility – suggest different. But if it is the case that she was unaware, then it seems the head of An Garda Síochána and the State security services cannot spot a smear campaign right under her nose. How, then, can we have any confidence in her to do the job?

There are systemic problems within the Garda hierarchy, and a tribunal will showcase these to the public. But the Morris tribunal did the same and nothing changed. If we truly want to reform the force, we need a new policing authority, one that is properly independent, and with powers to hold the Garda to account.

We also need to get rid of the current hierarchy. When Northern Ireland considered replacing the RUC with a new organisation that became the PSNI, the Patten commission was adamant the desired change would not occur until the authorities dismantled the hierarchy. So that’s exactly what they did.

We must do the same. The Garda hierarchy has failed whistleblowers such as Maurice McCabe and Nick Keogh for too long.