‘The irony was that on the government’s own doorstep, human rights abuses and torture were a reality at the same time’ 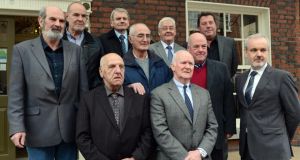 News this week that the Irish Government will seek a revision of the refusal of the European Court of Human Rights in 1978 to classify as torture the treatment of 14 “hooded men” interned by the RUC and British army in 1971 is a reminder of the curious and dangerous dichotomies and double standards of that decade, both in Ireland and internationally. While there was much preoccupation in the 1970s with heralding modernisation, cultural advance and the rights of individuals, there was also, as a result of the level of violence in many parts of the world, an often-brutal treatment of prisoners and those suspected of violence.

In his book The Seventies Unplugged (2010), Gerard DeGroot suggested “unlike the Sixties and the Eighties, for which themes abound, the Seventies seems a decade in between, a black hole of meaning”; what he terms “profound achievement” was ultimately overshadowed by the challenge of and responses to violence. Another renowned historian, Tony Judt, went further, describing the sour 1970s as “the most dispiriting decade of the twentieth century”.

There was no shortage of evidence for that demoralisation in Ireland, North and South. As the Troubles raged, and the number of fatalities soared, Anglo-Irish relations reached their nadir between 1971 and 1973.

The decision by the Irish government in 1971 to take the torture case to Europe was greatly resented by the British government. It was seen by some of the victims of British tactics during the early years of the Troubles as a corrective to the historic neglect by the Republic of the minority community in Northern Ireland and was also the result of pressure that community placed on taoiseach Jack Lynch, though Hugh McCann, the secretary of the Department of Foreign Affairs, urged caution, fearing Britain would get “really dirty” in handling Anglo-Irish relations.

The irony was that on the government’s own doorstep, human rights abuses and torture were also a reality. This newspaper exposed Garda brutality in February 1977 under the headline “Garda using North-style Brutality Interrogation Techniques”, including physical assault and severe psychological pressure.

The previous year, journalist Vincent Browne was told by a member of the Garda interrogation squad that their methods could not be considered torture because “we do not use instruments”.

In June 1977, the report of an Amnesty International mission to the Republic also highlighted maltreatment and claimed the government was doing nothing to hold those responsible to account. Amnesty also commented on the irony of the fact that the government had been proactive in securing the adoption by the UN in 1975 of a declaration on the prevention of torture and degrading treatment and recommendation of impartial investigations of such practices.

As is clear from State papers, these ironies were also recognised by politicians, civil servants and the general public; a letter received by Jack Lynch in September 1977 stated simply, “I don’t believe we can be two-faced about this – seeking enquiries abroad regarding the ill treatment of those interned in Northern Ireland and not conceding them at home.”

This selectivity applied to other issues in the 1970s, including homelessness, which, given the tragic consequences of this problem so apparent this week with the death of Jonathan Corrie, are worth highlighting.

On this very day 40 years ago, a report by Alice Leahy, then with the Simon Community, was published on the medical needs of those sleeping rough, who at that time were termed “vagrant”. It called for central co-ordinating bodies “with a view to improving communication between health boards, hospitals, hostels and general services”. It suggested in the region of 1,000 men and women in Dublin sought temporary night accommodation at that time or slept rough. The Minister for Health Brendan Corish established a task force the same year, which issued an interim report highlighting a number of major gaps in the existing approach to homelessness, requiring attention “as a matter of great urgency”.

This week, Minister for the Environment Alan Kelly insisted the issues around homelessness needed to be addressed “in a concerted way . . . it’s a question of everyone being joined up”. As highlighted by Leahy and others, that was also the problem when Jonathan Corrie was just two years old.