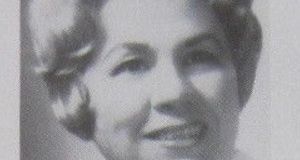 Virginia Morrow (née Burns). If a best-selling book from decades earlier can be believed, she had once watched her own funeral.

Twenty-five years ago this weekend, there died in Denver, Colorado, a woman named Virginia Morrow (née Burns). But according to at least one obituary, it might not have been her first death.

If a best-selling book from decades earlier can be believed, she had once watched her own funeral.

Then known as Virginia Tighe (from a previous marriage), she became a US-wide sensation in the 1950s due to an experiment in which she was placed under hypnosis by a family friend.

After first recovering memories of early childhood, she then regressed to a time long before that, taking on the persona and accent of one Bridey Murphy, born in 1790s Cork, who had spent her entire life in Ireland, a country Mrs Tighe never visited.

The story was first published in a series of articles by the Denver Post.

This led to a book, The Search for Bridey Murphy, written by the hypnotist, Morey Bernstein, which sold 170,000 copies on its appearance and led to a film of the same name.

But that was just the start. Under the headline “Bridey Murphy Puts Nation in a Hypno-Tizzy”, a March 1956 issue of Life Magazine reported that the phenomenon had inspired a coast-to-coast craze.

And inevitably, there was a huge surge of interest in hypnosis.

Life reported that in Houston (where a “Reincarnation Cocktail” was sold in bars), a hypnotised woman had started speaking Dutch, a language previously unknown to her.

Elsewhere, a man recalled a previous life as a Bavarian gardener during the reign of Mad King Ludwig.

There were more sinister incidents too, notably that of a 19-year-old newsboy in Oklahoma who, after declaring his intention to test the reincarnation theory, shot himself dead.

By now, however, journalists were fact-checking the story with a thoroughness the original book had neglected. Many details stood up, others did not.

One problem was that there existed no record of a Bridget Murphy’s birth in Cork, as the daughter of a barrister, on the date specified, December 20th, 1798.

Nor was there a record of her death, 66 years later in Belfast, by which time she was Bridey McCarthy – wife of another barrister – even though the Denver woman could remember that she had died in a fall and described her own funeral, including the gravestone.

Smaller details undermined the story’s credibility too. The voice of Bridey had recalled growing up in a white, wooden house called “The Meadows”. But as Life reported in 1956: “There are almost no wooden houses in Ireland because timber has always been too scarce. Cork is built almost entirely of stone and brick. Public records fail to disclose any house called The Meadows.”

Bridey’s husband, Sean, was said to have worked in Queen’s University at a time when it had not yet been founded.

In other oddities, she referred to the poet John Keats as a “Britisher”, which Life reported “every Irish authority” dismissed as an Americanism. Perhaps most damning was the way she pronounced Sean with two syllables, as in “See-an”.

Although Mrs Tighe-Morrow had been brought up by a Norwegian uncle and his German-Scottish-Irish wife, it later emerged that both her birth parents had been part-Irish.

More pertinently, it transpired that her childhood neighbours in Chicago included a woman born in Ireland as Bridie Murphy, albeit a century later that the other Bridey.

It should be noted that the woman who died in 1995 had not become rich or even famous from the book. By her account, a 5 per cent share of the proceeds yielded her about $11,000. And at the height of the craze, she had been disguised by a pseudonym, as Ruth Simmons.

She never again submitted to hypnosis, despite requests. And in 1976, during a rare interview, she told the Los Angeles Times she could no longer remember any of what she had recalled as Bridey.

On the other hand, having been sceptical all her life about the idea of reincarnation, she was by then more persuaded: “The weight of evidence seems to be going toward that belief.”

In the meantime, her inner Corkwoman continued to haunt US popular culture. Circa 1974, there was even a pop group called Bride Murphy. Lindsey Buckingham (better known as part of Fleetwood Mac) played with them briefly.

Film-maker Francis Ford Coppola nodded to the phenomenon too. In his 1986 rom-com Peggy Sue Got Married, the time-travelling heroine’s grandfather recalls reading a book about a woman from Colorado who had lived 150 years earlier in Ireland.

1 Gardaí cannot prosecute people who breach midlands movement restrictions
2 Irish in Australia: ‘We are in for a few hard years’
3 Covid-19: One more death and 174 further cases confirmed in State
4 TV Guide: 24 of the best shows to watch this week
5 Harry McGee: We are seeing the return of Straight-Talking Leo
Real news has value SUBSCRIBE